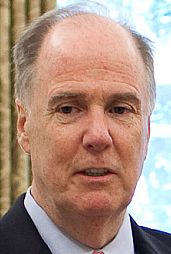 Last year, Defense Secretary Robert Gates said Donilon would be a “disaster” in that position and Jones said Donilon had “no credibility with the military.”

Was it Donilon’s performance as a vice president at Fannie Mae that impressed Obama?

If Obama is to be judged by those he surrounds himself with, it sure looks like he seeks the company of those who make him comfortable rather than those who appear most competent.

As reported by Woodward, the performance evaluation that Jones gave Donilon was pretty scathing:

First, he had never gone to Afghanistan or Iraq, or really left the office for a serious field trip. As a result, he said, you have no direct understanding of these places. “You have no credibility with the military.” You should go overseas. The White House, Situation Room, interagency byplay, as important as they are, are not everything.

Second, Jones continued, you frequently pop off with absolute declarations about places you’ve never been, leaders you’ve never met, or colleagues you work with. Gates had mentioned this to Jones, saying that Donilon’s sound-offs and strong spur-of-the-moment opinions, especially about one general, had offended him so much at an Oval Office meeting that he nearly walked out.

Third, he said, you have too little feel for the people who work day and night on the NSC staff, their salaries, their maternity leaves, their promotions, their family troubles, all the things a manager of people has to be tuned to. “Everything is about personal relations,” Jones said.

Update: Shoot-from-hip posts sometimes need revision. As others have pointed out, the criticisms of Donilon don’t necessarily put him in a negative light. My own snap judgement was largely based on a negative view of Jones and the expectation that his deputy was unlikely to outshine the general.

Immediate reaction within the administration to Jones’s resignation was consistent with the long-held view that Jones was never able to be effective as national security advisor because he was outside of Obama’s inner circle and was intellectually and sometimes physically cut out of major foreign policy discussions.

“Jones always carried an ’emeritus’ air about him and appeared removed and distant from the day-to-day operations,” one administration official told The Cable. “In six months, you will be hard pressed to find anyone in the administration who notices that Jones is no longer there.”

Emeritus is a polite way of saying unengaged. This was strikingly evident when he was the keynote speaker at the J Street conference last year.

So what about Donilon? Josh Rogin again:

According to all accounts, Donilon has been the machine running the NSC for some time, chairing the crucial deputies committee meetings and making the trains run on time throughout the NSC. But Donilon is not viewed as a strategic thinker along the lines of someone like former NSA Henry Kissinger or Zbigniew Brzezinski.

“Donilon will represent continuity and I can’t see any major shifts in policy stemming from the changeover,” one administration source said.

On one major issue, Jones and Donilon seemed to agree. Donilon is skeptical about the prospects for success in Afghanistan, for reasons similar to Jones’s. Just after Obama announced the decision to add 30,000 more troops to Afghanistan, Donilon said to the NSC’s Gen. Doug Lute, “My god, what have we got this guy into?,” according to Woodward.

And there you have — horribly predictably — the illegitimate offspring of “change”: continuity.

Everything’s being going so stunningly well, who could dream of changing course?

But Obama will need someone who can inspire boldness if he’s going to find a way out of the Afghan labyrinth. I don’t see that a man whose chief virtue is that he knows how to keep operations running smoothly will have such a talent.