While most Israelis can’t visit Ariel Sharon in hospital, they can now do the closest thing: go stand next to a life-size model of the former prime minister, propped up in bed, attached to a drip and steadily breathing in an otherwise empty room in a Tel Aviv art gallery. 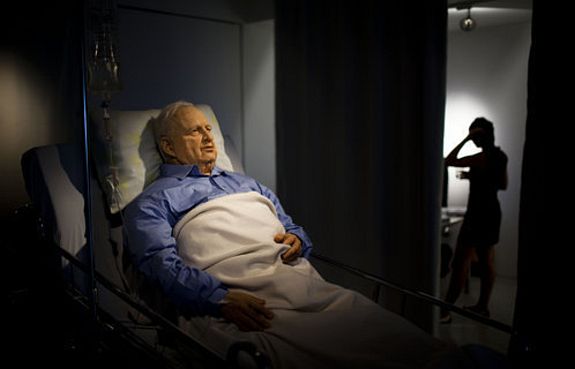 “Sharon’s still breathing and beating body is an allegory for the Israeli political body — a dependent and mediated existence, self-perpetuated artificially and out of inertia, with open eyes that cannot see,” the gallery’s curator Joshua Simon writes in an introduction to the exhibit, the creation of Israeli artist Noam Braslavsky.

Sharon’s coma mirrors the effect that Israel’s withdrawal from Gaza was intended to have: that it would suspend any real movement towards the creation of a Palestinian state.

But as Henry Siegman made clear, three years ago, the fiction that Israel was responsive to external stimuli began over 40 years ago:

Just one year after the 1967 war, Moshe Dayan, a former IDF chief of staff who at the time was minister of defence, described his plan for the future as ‘the current reality in the territories’. ‘The plan,’ he said, ‘is being implemented in actual fact. What exists today must remain as a permanent arrangement in the West Bank.’ Ten years later, at a conference in Tel Aviv, Dayan said: ‘The question is not “What is the solution?” but “How do we live without a solution?”’ Geoffrey Aronson, who has monitored the settlement enterprise from its beginnings, summarises the situation as follows:

Living without a solution, then as now, was understood by Israel as the key to maximising the benefits of conquest while minimising the burdens and dangers of retreat or formal annexation. This commitment to the status quo, however, disguised a programme of expansion that generations of Israeli leaders supported as enabling, through Israeli settlement, the dynamic transformation of the territories and the expansion of effective Israeli sovereignty to the Jordan River.

In an interview in Ha’aretz in 2004, Dov Weissglas, chef de cabinet to the then prime minister, Ariel Sharon, described the strategic goal of Sharon’s diplomacy as being to secure the support of the White House and Congress for Israeli measures that would place the peace process and Palestinian statehood in ‘formaldehyde’. It is a fiendishly appropriate metaphor: formaldehyde uniquely prevents the deterioration of dead bodies, and sometimes creates the illusion that they are still alive. Weissglas explains that the purpose of Sharon’s unilateral withdrawal from Gaza, and the dismantling of several isolated settlements in the West Bank, was to gain US acceptance of Israel’s unilateralism, not to set a precedent for an eventual withdrawal from the West Bank. The limited withdrawals were intended to provide Israel with the political room to deepen and widen its presence in the West Bank, and that is what they achieved.

Do we really have to wait until Sharon stops breathing before the peace process can officially be declared dead?

Whatever political differences there have been between Barak, Sharon, Olmert and Netanyahu, each Israeli prime minister has shown himself equally adept in the art of living without a solution, “with eyes open that cannot see.”