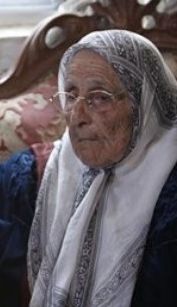 In a quiet street in the Sheikh Jarrah district of occupied East Jerusalem 88-year-old Rifka al-Kurd is explaining how she came to live in the house she and her husband built as Palestinian refugees in the 1950s. As she speaks, three young ultra-orthodox Jewish settlers swagger in to stake their claim to the front part of the building, shouting abuse in Hebrew and broken Arabic: “Arab animals”, “shut up, whore”.

There is a brief physical confrontation with Rifka’s daughter as the settlers barricade themselves in to the rooms they have occupied since last winter. That was when they finally won a court order to take over the Kurd family’s extension on the grounds that it was built without permission – which Palestinians in Jerusalem are almost never granted. It is an ugly scene, the settlers’ chilling arrogance underpinned by the certain knowledge that they can call in the police and army at will.

But such takeovers of Palestinian homes in Sheikh Jarrah have become commonplace, and the focus of continual protest. The same is true in nearby Silwan, home to upwards of 30,000 Palestinians next to the Old City, where 88 homes to 1,500 Palestinians have been lined up for demolition to make way for a King David theme park and hundreds of settlers are protected round the clock by trigger-happy security guards.

Throughout the Arab areas of Jerusalem, as in the West Bank, the government is pressing ahead with land expropriations, demolitions and settlement building, making the prospects of a Palestinian state ever more improbable. More than a third of the land in East Jerusalem has been expropriated since it was occupied in 1967 to make way for Israeli colonists, in flagrant violation of international law.

Israel’s latest settlement plans were not “helpful”, Barack Obama ventured on Tuesday. But while US-sponsored Israeli-Palestinian negotiations go nowhere and attention has been focused on the brutal siege of Gaza, the colonisation goes on. It is also proceeding apace in Israel proper, where the demolition of Palestinian Bedouin villages around the Negev desert has accelerated under Binyamin Netanyahu.

About 87,000 Bedouin live in 45 “unrecognised” villages, without rights or basic public services, because the Israeli authorities refuse to recognise their claim to the land. All have demolition orders hanging over them, while hundreds of Jewish settlements have been established throughout the area.

The Israeli writer Amos Oz calls the Negev a “ticking time bomb”. The village of Araqeeb has been destroyed six times in recent months and each time it has been reconstructed by its inhabitants. The government wants to clear the land and move the Bedouin into designated townships. But even there, demolitions are carried out on a routine basis.