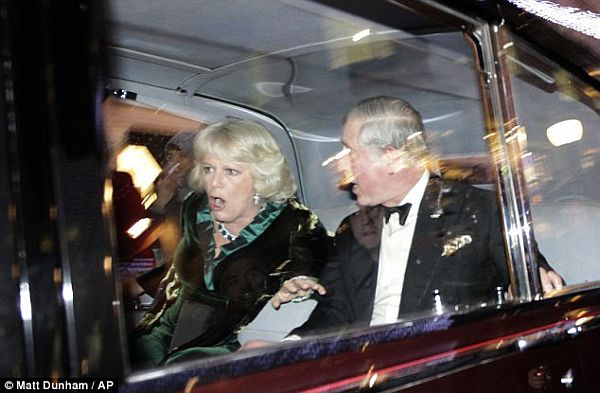 “Off with their heads,” shouted demonstrators crowding round the Rolls Royce carrying Prince Charles and his wife Camilla to a West End theater last night. Even if he didn’t fear for his life, Britain’s heir to the throne was reminded of the fate of his namesake, Charles I, last time Britons violently upturned the established order. And even if to Americans the British monarchy has the appearance of a quaint anachronism, the incident serves as a reminder that there are never any institutional seats of power that can perfectly protect themselves from the wrath of a population that forcefully demands to be heard.

For much of the last two decades, the West’s cynical democratic leaders have comforted themselves with the knowledge that governmental power rarely requires popular support. With election strategies that hinge on securing a 51% majority — a minority from a largely apathetic electorate — the only constituencies that have demanded and been rewarded with loyal service are those who pay handsomely to have their interests represented.

No more. The new British government recently volunteered to test the theory that austerity measures are not only a panacea for the economic travails of these times, but that a docile population will buckle under when forced to swallow bitter medicine. Unless the government is forced to change course, this will make higher education unfordable for most of a generation.

On the streets of London, Britain’s young people are now demonstrating that their character has been misjudged. None has done so more articulately than Barnably, a 15 year-old speaking at the Coalition of Resistance national conference in London on November 27.

The last 30 days have shaken the coalition. Together with UCU, the lecturers’ union, we brought 50,000 to the streets of London on 10 November for the biggest student demonstration in a generation. It has sparked a new wave of activism that has involved tens of thousands of students, parents, pupils and teachers in creative, nonviolent protests and direct action.

By piling pressure on MPs with dozens of spontaneous demonstrations, scores of occupations and hundreds of thousands taking action around the country, we have come together to defend education and fight for our future. A generation has found its voice.

In its founding statement, the Coalition of Resistance declared:

It is time to organise a broad movement of active resistance to the Con-Dem government’s budget intentions. They plan the most savage spending cuts since the 1930s, which will wreck the lives of millions by devastating our jobs, pay, pensions, NHS, education, transport, postal and other services.

The government claims the cuts are unavoidable because the welfare state has been too generous. This is nonsense. Ordinary people are being forced to pay for the bankers’ profligacy.

The £11bn welfare cuts, rise in VAT to 20%, and 25% reductions across government departments target the most vulnerable – disabled people, single parents, those on housing benefit, black and other ethnic minority communities, students, migrant workers, LGBT people and pensioners.

Women are expected to bear 75% of the burden. The poorest will be hit six times harder than the richest. Internal Treasury documents estimate 1.3 million job losses in public and private sectors.

We reject this malicious vandalism and resolve to campaign for a radical alternative, with the level of determination shown by trade unionists and social movements in Greece and other European countries.

This government of millionaires says “we’re all in it together” and “there is no alternative”. But, for the wealthy, corporation tax is being cut, the bank levy is a pittance, and top salaries and bonuses have already been restored to pre-crash levels.

An alternative budget would place the banks under democratic control, and raise revenue by increasing tax for the rich, plugging tax loopholes, withdrawing troops from Afghanistan, abolishing the nuclear “deterrent” by cancelling the Trident replacement.

An alternative strategy could use these resources to: support welfare; develop homes, schools, and hospitals; and foster a green approach to public spending – investing in renewable energy and public transport, thereby creating a million jobs.

In another address to the national conference, the rapper, Lowkey, pointed out that the Liberal Democrats have not only reversed themselves on the issue of university tuition fees but also abandoned their proposal of an arms embargo on Israel. He also noted the irony that even during the rule of a Tory government, the Conservative Party headquarters in London has less protection than the Israeli embassy.

8 thoughts on “The age of political apathy is ending”