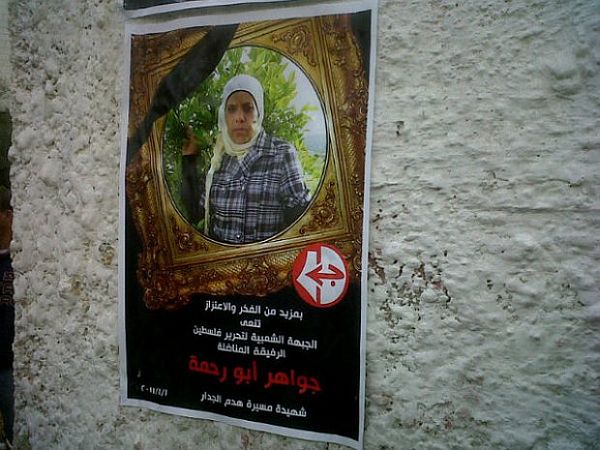 Jawaher Abu Rahmah, 36, was evacuated to the Ramallah hospital yesterday after inhaling massive amounts of tear-gas during the weekly protest in Bil’in, and died of poisoning this morning. Abu Rahmah was the sister of Bassem Abu Rahmah who was also killed during a peaceful protest in Bil’in on April 17th, 2010.

Jawaher Abu Rahmah was the sister of Bil’in activist, Bassem Abu Rahmah, who was shot dead with a high velocity tear-gas projectile during a demonstration in the village on April 17th, 2009.

The Israelis used two types of gas canisters. The first, which you can see in this short video I took (below), is a fist-sized bulbous rubber projectile. It begins to dispense gas in air, causing it to spin wildly and change directions before it hits the ground. Its trajectory is very hard to predict.

The second type of canister is the more deadly kind – the kind that killed Bassem Abu Rahmah in 2009. It’s also used liberally by the young supremacists in uniform. Yesterday the steel canisters, about fifty percent larger than a neat stack of quarters, were fired directly at protesters. Their trajectory is more or less straight, but they come at you much faster.

And the gas. Well, ‘tear gas’ is a bad name for it. It feels like a million blue shards of glass tearing at your alveoli and shredding your eyes. You can’t see and double over, trying not to breathe. Acid tears are streaming down your face, but the overwhelming sensation is of being bombarded and suffocated. You’re ensconced in darkness and your thoughts are disrupted – you only want to get away. And every breath tears at your insides; vicious animals live in your lungs. I’d rather not breathe than take one more anguished, searing, charred breath. Then, you don’t have a choice; you can’t breathe. You’re struggling to run and are overcome by dizziness. Other people help you escape.