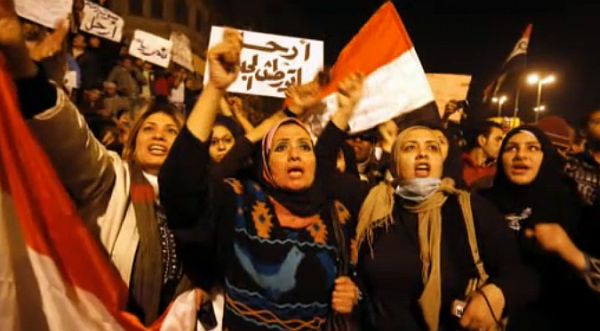 As the Million Egyptian March takes to the streets of Cairo, is President Obama finally ready to take a strong stand on the side of the people?

In The Guardian, Michael Tomasky writes “Obama is in no position to offer the moral thunder the protesters and their supporters everywhere crave.” Why? Because “the US should not be dictating outcomes any more. The modern world requires a US posture that is more fluid and subtle, and that no longer seeks to call the global shots.”

Having watched events over the last week as closely as one can from a great distance, I would say there has been no lack of moral thunder. It has come from the voices of the Egyptian people.

Having demonstrated their pride, dignity, and collective power with such force, I don’t think they crave anything from Washington or anywhere else — bar the fulfillment of their single demand: that Hosni Mubarak stand down.

To the extent that the expectations of many Egyptians and others are directed towards Washington and Obama, it is perhaps with the hope that anyone who supports democracy would celebrate the extraordinary sight of democracy being born.

Obama’s inhibitions probably say less about the fear of being perceived in the Middle East as the leader of an imperial power which still insists on calling the global shots, than in being seen by his fellow Americans supporting a revolution that they fear.

Indeed, as Benjamin Netanyahu compares the Egyptian revolution of 2011 with the Iranian revolution in 1979, Obama surely fears some form of retribution from AIPAC in 2012 if he is portrayed as having undermined Israel’s security. Above all, the 2012 incumbent presidential candidate does not want to be cast as having played a role in shaping Egypt’s future.

The most courageous thing Obama could do at this point would not be to make some grandiose expression of American support for the Egyptian people — an expression which this late in the day would carry little credibility. No, if he wants to stand up in defense of democracy, he should addressing a domestic audience — one that apparently has lost faith that democracy is a good thing.

If Americans can’t support the democratic rights of Egyptians, what does that say about how seriously we want to protect our own rights? After all, the unalienable rights upon which America was founded were not conceived as American rights but universal human rights. If we don’t stand in solidarity with Egyptians, have we not also lost faith in the principles upon which America was founded?

I do have an unyielding belief that all people yearn for certain things: the ability to speak your mind and have a say in how you are governed; confidence in the rule of law and the equal administration of justice; government that is transparent and doesn’t steal from the people; the freedom to live as you choose. These are not just American ideas; they are human rights. And that is why we will support them everywhere.

But what held the greater significance? The sentiment and meaning of Obama’s words or the fact that he delivered them as the honored guest of Hosni Mubarak?

1 thought on “Standing up for democracy”