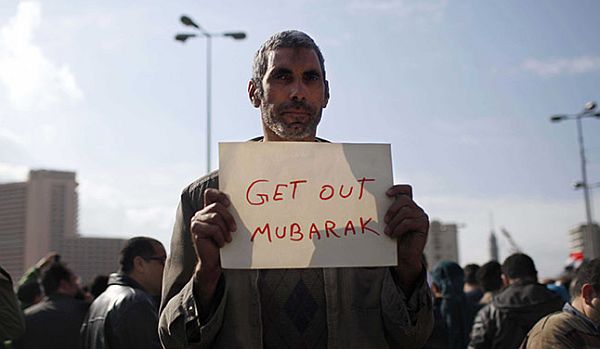 Dictators invariably see themselves as uber-nationalists — right to the point of seeing themselves as indivisible from the nation. Mubarak’s refusal to bow out swiftly means he has chosen chaos. The US and the rest of the world no longer have the luxury of meekly watching from afar.

Mubarak wants to stick around for a few more months — game not over.

Frank Wisner, a former ambassador to Egypt who has good relations with the Mubarak regime, traveled to Cairo at President Obama’s behest to talk to the Egyptian leader about the country’s future.

Wisner delivered a direct message that Mubarak should not be part of the “transition” that the U.S. had called for, according to Middle East experts who spoke on condition of anonymity.

One expert on the region said that in his regular conversations with the Obama administration about the unrest in Egypt, he learned that Wisner’s message to Mubarak was that “he was not going to be president in the future. And this message was plainly rebuffed.”

Reuters — Mubarak will say in a televised speech that he will step down at the next election but would stay in office till then to meet demands of protesters in that period, Al Arabiya TV reported on Tuesday.

New York Times — “President Obama has told the embattled president of Egypt, Hosni Mubarak, that he should not run for another term in elections in the fall, effectively withdrawing American support for its closest Arab ally, according to American diplomats in Cairo and Washington.”

The Rorschach test from Cairo: a dignified and disciplined act of collective prayer? Or a dangerously large gathering of Muslims?

Perhaps more than anything, American perceptions of Islam reveal the extent to which this nation celebrates religion without the slightest notion of piety — not surprising, given the degree to which religion and nationalism have become interwoven.

“It needs to be understood that if the Egyptian government will fall, the Muslim Brotherhood will take its place, and that will cause even worse problems not only for the Middle East, but for the whole world.” This is the assessment of Israel’s Deputy Minister for Galilee and Negev Development Ayoub Kara.

What’s interesting about these kind of the-sky-is-falling predictions coming from Israel and its febrile supporters is that in a matter of months their fears are likely to be proved baseless. To begin with, the great Islamist bogeyman of Egypt, the Muslim Brotherhood, is likely to move from unofficial to legal participation in parliamentary politics quite cautiously. This is a conservative organization in the traditional sense of the term “conservative” — as opposed to the histrionic modern American meaning of the word. Indeed, I doubt that any single political group will be in a rush to grab power during the most difficult period of Egypt’s political rebirth.

The most immediate point of tension between a new Egyptian government and Israel will be over Gaza and this will be the test of the new government’s democratic credentials. Hopefully it will do the right thing and refuse to be complicit in the siege. But of course I’m getting way ahead of events now …

Jeff Jarvis: “Vital, world-changing news is occurring in the Middle East and no one — not the xenophobic or celebrity-obsessed or cut-to-the-bone American media — can bring the perspective, insight, and on-the-scene reporting Al Jazeera English can.”

As the region reconfigures itself, the US should help Israel adjust to a new reality – convincing Israel to withdraw from the Palestinian territories would be the best option, but just explaining to Israel that America now has to deal with an Arab politics that is in its post-dictatorship phase and will henceforth have to be more responsive to public opinion – that will be a necessity.

Indeed — but that could be asserted even more strongly, which is to say, come the day that the US government no longer has at its disposal a clutch of autocratic rulers who depend for their survival on US support, the US will no longer be able to afford the luxury of deferring to Israel’s interests. In other words, this is an opportunity for everyone to grow up — no more pandering to a whiny Zionist brat that has long relied on its ability to manipulate its over-indulgent American parent. 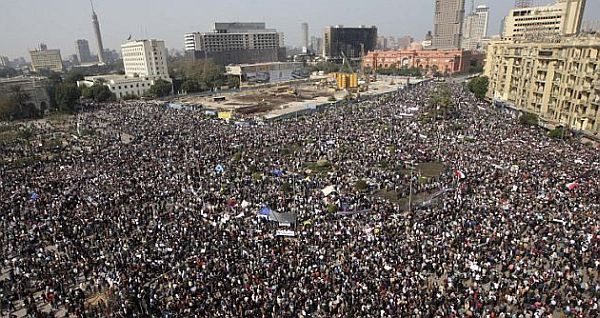 The Guardian — Bibliotheca Alexandrina and other cultural sites across Egypt are being protected by Egypt’s young people:

In a statement on the library’s site, Ismail Serageldin tells “friends around the world” that the library is being protected by the city’s youth from the threat of looting by the “lawless bands of thugs, and maybe agents provocateurs” who have materialised since the popular protests sweeping through Egypt’s major cities began several days ago.

“The young people organised themselves into groups that directed traffic, protected neighborhoods and guarded public buildings of value such as the Egyptian Museum and the Library of Alexandria,” he states. “They are collaborating with the army. This makeshift arrangement is in place until full public order returns.”

The Clash of Conservatives! Egyptian revolution causes a split between right-wing xenophobic isolationist Glenn Beck and right-wing xenophobic US hegemonist Bill O’Reilly. Hopefully it won’t take long before all of their hysterical fear-mongering predictions are exposed as baseless. They and many other Americans would be well-served by remembering the courageous and inspiring example that many Egyptian Muslims showed in early January when they offered themselves as human shields, protecting fellow Egyptians who are Christians.

9.04 — While the US State Department is organizing the evacuation of American citizens from Egypt (even though the US acknowledges that there have been no signs of hostility towards Americans), Al Jazeera reports that some tourists from several countries, rather than trying to leave have instead joined the revolution. There are claims that as many as eight million Egyptians across the country are now protesting, calling for Mubarak to stand down. As many as two million are now gathered in Tahrir Square in the center of Cairo.

8.30 — Al Jazeera: Opposition leaders say they will enter into dialogue with Vice President Omar Suleiman after Mubarak stands down.

Simon Tisdall writes: “Suleiman is, in effect, heading a military junta at this point, with all the principal civilian power positions – the presidency, the vice-presidency, the premiership, the defence and interior ministries – held by former senior officers, and with the military itself in full support.

“Mubarak is now reduced to the role of figurehead, sheltering behind this clique. But they will not sacrifice him if they can avoid it. There will be no ignominious flight to Saudi Arabia, like Tunisia’s deposed president, Zine al-Abidine Ben Ali. Mubarak’s pride won’t allow it. The military’s pride won’t allow it.”

Ahdaf Soueif writes: “Today we have rejected the passivity our rulers have been imposing on us. Our country’s security is being provided by its citizenry. People have automatically taken over the running of their neighbourhoods. On the streets there is unfailing courtesy. The atmosphere in the square sit-ins is celebratory and inclusive.”

Al Jazeera — Erdogan calls for Mubarak to stand down:

EU calls for an orderly transition to a broad-based government:

Bloomberg — The Washington lobbyists in bed with Mubarak

Steven Cook writes: “If anyone ever doubted it, recent events highlight that the armed forces is the pillar of the regime. The National Democratic Party no longer exists. Big business has fled. The police (remember all those arguments about how the police supplanted the military?) forces have collapsed. Only the military remains and thus far they don’t seem to be budging. We are getting into existential territory. The result could be a drawn out stalemate with the military pursuing a holding action while Omar Soleiman’s intelligence service tries to split the opposition. These guys are brutal, but not dumb.”

Helena Cobban writes: “There are many objective reasons why Washington has been unable to intervene to prop up its longtime ally. What, after all, could Washington have hoped to do? It has no strike force of its own capable of swooping in and beating back the protesters, in the way that the British or French empires might have attempted in similar circumstances 100 years ago. And in an era in which protesters can immediately hold up for the cameras of the global media tear gas shells or rubber-coated steel bullets that clearly signal “Made in the USA,” there is not a lot of indirect help Washington could have given Mubarak’s security forces, either.”

Jeremy Scahill writes: “The real threat Al Jazeera poses to authoritarian regimes is in its unembedded journalism. That is why the Bush Administration viewed Al Jazeera as a threat, it is why Mubarak’s regime is trying to shut it down and that is why the network is so important to the unfolding revolutions in the Middle East. It is the same role the network plays in reporting on the disastrous US war in Afghanistan.”

As I write, Egyptian President Mubarak is closing our offices and arresting our journalists. The Egyptian government has removed Al Jazeera from NileSat, the state-owned satellite carrier, delaying our ability to be found on the dial in Egypt and North Africa. We have reappeared through other carriers, while instructions on how to find us go viral across the Internet.

Elsewhere, in the United States, Al Jazeera faces a different kind of blackout, based largely on misinformed views about our content and journalism. Some of the largest American cable and satellite providers have instituted corporate obstacles against Al Jazeera English. We are on the air and on the major cable system in the nation’s capital, and some of America’s leading policymakers in Washington, D.C., have told me that Al-Jazeera English is their channel of choice for understanding global issues. But we are not available in the majority of the 50 states for much of the general public.

We believe all Americans, not just those in senior governmental positions, could benefit from having the option to watch Al-Jazeera English — or not to watch us — on their television screens.

We know the demand is there. We have seen a 2000 percent increase in hits on our English-language website, and more than 60 percent of that traffic originates in the United States. We have seen Jeff Jarvis, in the pages of the Huffington Post, make the case publicly that many are making privately. While millions of Americans have turned to the Internet and to Internet-connected-devices, many more millions should have the freedom to flip to our channel on their remotes — especially when the Middle East is on everyone’s mind.

10 thoughts on “Egyptians speak with one voice — live updates”