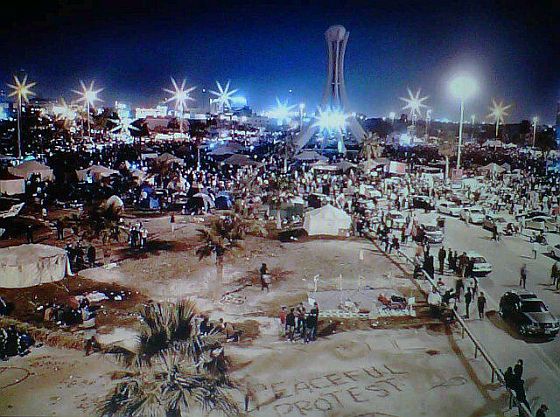 Al Jazeera is now reporting that at least two people have been killed and dozens injured as Bahrain police attacked sleeping demonstrators in the early hours of Thursday morning. The New York Times said:

Hundreds of riot police surrounded the nation’s symbolic center, Pearl Square, in the early morning Thursday, raining tear gas and percussion grenades on thousands of demonstrators who had poured into the square all day Wednesday to challenge the country’s absolute monarchy.

The protesters, including women and children, had been camping out and the atmosphere had been festive only hours before. But by about 3:30 a.m. Thursday, people were fleeing, screaming “We were sleeping. We were sleeping,” and ambulances, sirens blaring, were trying to make their way through the crowds.

Witnesses, some of them vomiting from the gas, said they had no warning the police were going to crack down on their peaceful protest before rows of police vehicles with blue flashing lights began to circle the area.

Shiite opposition leaders had spent the day Wednesday issuing assurances that they were not being influenced by Iran and were not interested in transforming the monarchy into a religious theocracy like the Islamic republic in Iran.

But that did not stop what appeared to be government attempts to deter the demonstrators who had laid claim to the square, the symbolic heart of the nation. Hours before the police action, the Internet was jammed to a crawl and cellphone service was intermittent. Those efforts, however, only seemed to energize the roaring crowds, which spilled out of the square, tied up roads for as far as the eye could see and united in a celebration of empowerment unparalleled for Bahrain’s Shiites, who make up about 70 percent of the country’s 600,000 citizens.

The following report from Al Jazeera was broadcast before the latest deaths. The position of the Bahrain royal family must now be even more precarious.

Where’s the next place to blow in the Arab revolution? Candidates are many, but there’s one whose geopolitical impact vastly exceeds its diminutive size — the island of Bahrain.

This is a place run by an oppressive and corrupt little regime, long coddled by Washington because the U.S. Navy’s Fifth Fleet is headquartered there. The future of the base is far from secure if the regime falls.

A few hard facts about the island that should give pause for thought:

First, Bahrain is a Shiite island. You won’t see it described that way, but it is — 70 percent of the population, more than the percentage of Shiites in Iraq. And like Iraq under Saddam Hussein, these Arab Shiites have been systematically discriminated against, repressed, and denied meaningful roles by a Sunni tribal government determined to maintain its solid grip on the country. The emergence of real democracy, as in Iraq, will push the country over into the Shiite column — sending shivers down the spines of other Gulf rulers, and especially in Riyadh.

Appearances are deceiving. Go to Bahrain and on the surface you won’t feel the same heavy hand that dominates so many other Arab authoritarian states. The island is liberal in its social freedoms. Expats feel at home — you can get a drink, go to nightclubs, go to the beach, party.

But if you look behind the Western and elite-populated high-rises you’ll encounter the Shiite ghettoes — poor and neglected, with high unemployment, walls smeared with anti-regime graffiti.

Free market? Sure, except the regime imports politically neutered laborers from passive, apolitical states that need the money: Filipinos, Bangladeshis, Sri Lankans and other South Asians who won’t make waves or they’re on the next plane out.

The regime also imports its thugs. The ranks of the police are heavily staffed with expat police who often speak no Arabic, have no attachments to the country and who will beat, jail, torture and shoot Bahraini protesters with impunity.