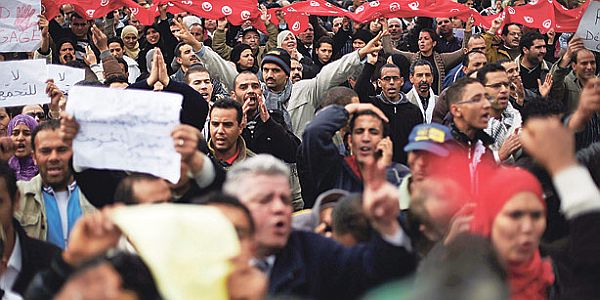 Mubarak claimed that Islamists were behind the Egyptian revolution. Ben Ali said the same in Tunisia. King Abdullah of Jordan sees a dark and sinister hand – al-Qa’ida’s hand, the Muslim Brotherhood’s hand, an Islamist hand – behind the civil insurrection across the Arab world. Yesterday the Bahraini authorities discovered Hizbollah’s bloody hand behind the Shia uprising there. For Hizbollah, read Iran. How on earth do well-educated if singularly undemocratic men get this thing so wrong? Confronted by a series of secular explosions – Bahrain does not quite fit into this bracket – they blame radical Islam. The Shah made an identical mistake in reverse. Confronted by an obviously Islamic uprising, he blamed it on Communists.

Bobbysocks Obama and Clinton have managed an even weirder somersault. Having originally supported the “stable” dictatorships of the Middle East – when they should have stood by the forces of democracy – they decided to support civilian calls for democracy in the Arab world at a time when the Arabs were so utterly disenchanted with the West’s hypocrisy that they didn’t want America on their side. “The Americans interfered in our country for 30 years under Mubarak, supporting his regime, arming his soldiers,” an Egyptian student told me in Tahrir Square last week. “Now we would be grateful if they stopped interfering on our side.” At the end of the week, I heard identical voices in Bahrain. “We are getting shot by American weapons fired by American-trained Bahraini soldiers with American-made tanks,” a medical orderly told me on Friday. “And now Obama wants to be on our side?”

The events of the past two months and the spirit of anti-regime Arab insurrection – for dignity and justice, rather than any Islamic emirate – will remain in our history books for hundreds of years. And the failure of Islam’s strictest adherents will be discussed for decades. There was a special piquancy to the latest footage from al-Qa’ida yesterday, recorded before the overthrow of Mubarak, that emphasised the need for Islam to triumph in Egypt; yet a week earlier the forces of secular, nationalist, honourable Egypt, Muslim and Christian men and women, had got rid of the old man without any help from Bin Laden Inc. Even weirder was the reaction from Iran, whose supreme leader convinced himself that the Egyptian people’s success was a victory for Islam. It’s a sobering thought that only al-Qa’ida and Iran and their most loathed enemies, the anti-Islamist Arab dictators, believed that religion lay behind the mass rebellion of pro-democracy protesters.

After the battle for Tahrir Square, the conceptual grid that Western officials have used to divide the Islamic world into friends and enemies, moderates and radicals, good Muslims and bad Muslims has never looked more inadequate, or more irrelevant. A ‘moderate’ and ‘stable’ Arab government, a pillar of US strategy in the Middle East, has been overthrown by a nationwide protest movement demanding democratic reform, transparent governance, freedom of assembly, a more equitable distribution of the country’s resources and a foreign policy more reflective of popular opinion. It has sent other Arab governments into a panic while raising the hopes of their young, frustrated populations. If the revolution in Egypt succeeds, it will have swept away not only a corrupt and autocratic regime, but the vocabulary, and the patterns of thought, that have underpinned Western policy in the greater Middle East for more than a half century.

The fate of Egypt’s revolution – brought to a pause by the military’s seizure of power on 11 February, after Mubarak’s non-resignation address to his ‘children’ – remains uncertain. Mubarak is gone, but the streets have been mostly cleared of protesters and the army has filled the vacuum: chastened, yet still in power and with considerable resources at its disposal. Until elections are held in six months, the Supreme Council of the Armed Forces will be ruling by decree, without the façade of parliamentary government. The parliament, voted into office in rigged elections, has been dissolved, a move that won wide support, and a new constitution is being drafted, but it’s not clear how much of a hand the opposition will have in shaping it. More ominously, the Supreme Council has vowed to punish anyone it can accuse of spreading ‘chaos and disorder’. The blunt rhetoric of its communiqués may be refreshing after the speeches of Mubarak, his son Gamal and the industrialists who dominated the ruling National Democratic Party, with their formulaic promises of reform and their talk of the nobility of the Egyptian people but ten days ago in Tahrir Square the protesters said – maybe even believed – that the army and the people stood together. Today the council’s communiqués are instructions, not proposals to be debated, and it has notably failed to answer the protesters’ two most urgent demands: the repeal of the Emergency Law and the release of thousands of political prisoners.

The Egyptian revolution has captivated audiences and inspired a sense of endless new possibilities. Whether it is a “new dawn” or “a dividing point in history” (as I heard it described by Jordanians and Palestinians across the political spectrum), Egyptians are seen as having brought down a rotten system as they begin to write their own future. The only question is how other Arabs (and maybe even Iranians) can join them.

I am not yet so sure.

It is not that the old regime still remains (though it does; the junta and the cabinet are both still staffed by pre-revolutionary appointees and only vague hints of a cabinet reshuffle have been floated). It is clear that real change of some kind will take place. But the shape of the transition has not yet been defined. A more democratic, pluralistic, participatory, public-spirited, and responsive political system is a real possibility. But so is a kinder, gentler, presidentially-dominated, liberalized authoritarianism. In this post, I will discuss the state of play in Egypt; in future writings I hope to explore the implications for other regimes in the region.

The danger of indefinite military rule in Egypt is small. While pundits have often proclaimed the military to be the real political power in Egypt since 1952, in fact the political role for the military has been restricted for a generation. And there is no sign that the junta wants to change that for long. It is order, not power that they seem to seek. When the generals suspended the constitution, most opposition elements saw that as a positive step because it made possible far-reaching change, and I think that was a correct political judgment. (The suspension led to odd headlines in international press referring to Egypt as now being under martial law. But Egypt has been under martial law with only brief interruptions since 1939. It was not the generals who placed Egypt under martial law; that step was taken by King Faruq.)

But if the suspension of the constitution allowed the possibility of fundamental change, it did not require it. Indeed, the transition as defined by Egypt’s junta seems both extremely rushed and very limited.

He organized his first demonstration while still a student in 1998, then got arrested and tortured by Egyptian police two years later at age 23. Now he has seen the fall of the president he spent his adult life struggling against.

For 33-year-old activist Hossam el-Hamalawy, though, Egypt’s three-week youth revolution is by no means over — there remains a repressive state to be dismantled and workers who need to get their rights.

“The job is unfinished, we got rid of (Hosni) Mubarak but we didn’t get rid of his dictatorship, we didn’t get rid of the state security police,” he told The Associated Press while sipping strong Arabic coffee in a traditional downtown cafe that weeks before had been the scene of street battles.

The activism career of el-Hamalawy typifies the long, and highly improbable, trajectory of the mass revolt that ousted Mubarak, Egypt’s long-entrenched leader. Once a dreamer organizing more or less on his own, el-Hamalawy’s dreams suddenly hardened into reality. The next step, he says, is the Egyptian people must press their advantage.

“This is phase two of the revolution,” said el-Hamalawy, who works as a journalist for an English-language online Egyptian paper and runs the Arabawy blog, a clearing house for information on the country’s fledgling independent labor movement — a campaign that has become increasingly assertive since the fall of the old government.

Then one day in late January, it all came together for them. They were part of a movement, hundreds of thousands strong.

For three weeks, el-Hamalawy fought regime supporters and manned the barricades in Tahrir Square, but unlike the youth leaders who have come to prominence in the aftermath of the uprising, he refuses to talk to the generals now ruling Egypt and fears the uprising’s momentum is being lost as everyone waits for the military to transition the country to a new government.