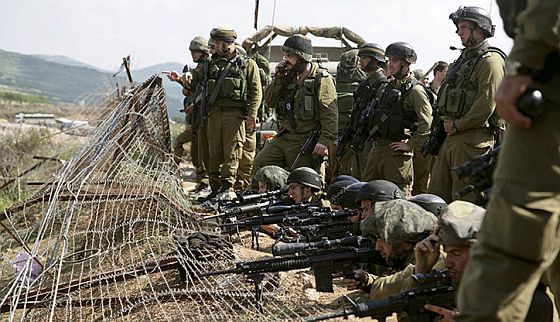 Several people have been killed and scores of others wounded in the Gaza Strip, Golan Heights, Ras Maroun in Lebanon and the Israeli-occupied West Bank, as Palestinians mark the “Nakba”, or day of “catastrophe”.

The “Nakba” is how Palestinians refer to the 1948 founding of the state of Israel, when an estimated 700,000 Palestinians fled or were expelled following Israel’s declaration of statehood.

At least one Palestinian was killed and up to 80 others wounded in northern Gaza as Israeli troops opened fire on a march of at least 1,000 people heading towards the Erez crossing between the Gaza Strip and Israel.

A group of Palestinians, including children, marching to mark the “Nakba” were shot by the Israeli army after crossing a Hamas checkpoint and entering what Israel calls a “buffer zone” – an empty area between checkpoints where Israeli soldiers generally shoot trespassers, Al Jazeera’s Nicole Johnston reported from Gaza City on Sunday.

Sixty years ago in Battir, my small hillside village near Jerusalem, I witnessed the chaotic collapse of the British Mandate administration in Palestine and the beginning of the Nakba.

The previous months had been decisive ones for the fate of Palestine, although we did not yet know it. The Jews, fed up with British procrastination in fulfilling Balfour’s promise of letting them transform our homeland into their “national home,” launched a bloody campaign of terror both against the British and the Arabs. The Jewish militias targeted the British to speed up their departure from Palestine, and hit the Arabs to quell the rising resistance to Zionist colonization. Violence broke out in early 1947, after the British announced that they would leave Palestine by 15 May 1948. When the United Nations passed its partition resolution on 29 November 1947, the violence began to lurch into full-scale war.

Battir’s 1,200 inhabitants were wracked by uncertainty. There were hopes that things would turn out all right, but fear dominated as the atmosphere became bleaker by the day.

I vividly remember the stories of horror which haunted the people of Battir, such as the attack on the railway station in Jerusalem on 21 October 1946. The train was their lifeline to the city where they marketed their produce and bought their supplies. People also walked to Jerusalem and often traveled by car on the unpaved road that ran parallel to the railway line, though that was much harder. A few months earlier a Jewish bomb attack on Jerusalem’s King David Hotel, which served as the British headquarters, killed 91 people and injured dozens. Later, after the partition vote, when the Zionist forces began their armed campaign to seize Palestine, fighting erupted between Arabs and Jews in the land they both claimed.

I never heard the word Nakba before the nineties. It was simply not present in the Israeli language, or in the popular culture. Naturally, we knew that some Arabs left Israel in 1948, but it was all very vague. While we were asked to cite numbers and dates of the Jewish waves of immigration to Israel, details on the Palestinian parts of the story were sketchy: How many Palestinians left Israel? What were the circumstances under which they left? Why didn’t they return after the war? All these questions were irrelevant, having almost nothing to do with our history—that’s what we were made to think.

Occasionally, we were told that the Arabs had left under their own will, and it seemed that they chose not to come back, at least in the beginning. Years later, I was shocked to read that most of the notorious “infiltrates” from the early fifties were actually people trying to come back to their homes, even crossing the border to collect the crops from their fields at tremendous risk to their life – as IDF units didn’t hesitate to open fire.

We were made to think they were terrorists…

It’s hard to explain the mechanism which makes some parts of history “important” or some elements of the landscape “interesting.” I can only say that looking back, I understand how selective the knowledge we received was. But there is more to this. I think we all chose not to think about those issues. Even after the New Historians of the nineties made the term Nakba a part of modern Hebrew and proved that in many cases, Israel expelled Palestinians from territories it conquered in ‘48, we were engaged in the wrong kind of questions, such as the debate on whether more Palestinian were expelled or fled. The important thing is that they weren’t allowed to come back, and that they had their property and land seized by Israel immediately after the war (as some Jews had by Jordan and Syria, but not in substantial numbers). Leaving a place doesn’t make someone a refugee. It’s forbidding him or her from coming back that does it.