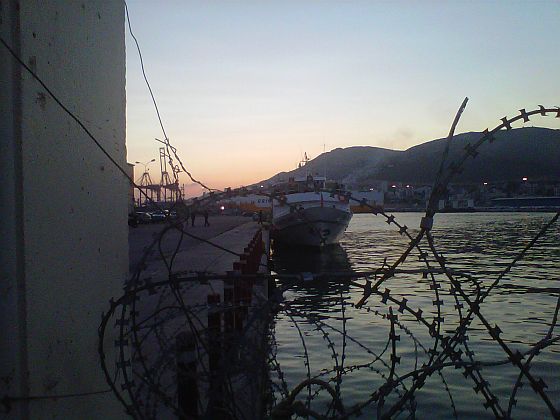 'We were forced to go back to a Greek port surrounded with bars and barbwire.' -- The Audacity of Hope

With the propeller shafts of two ships mysteriously damaged, Greek authorities holding other vessels in port on government orders and an American boat turned back by the Greek Coast Guard just 20 minutes off the coast Friday, the international flotilla to Gaza has stalled.

Organizers say they see the long arm of Israel behind their improbable woes, and while Israeli officials have dismissed such accusations as so much conspiracy mongering, they have declined to deny them outright.

One year after Israeli commandos killed nine Turkish activists aboard the Mavi Marmara during an earlier flotilla, organizers had hoped to once again challenge the naval blockade of the Gaza Strip on the open seas, off the Gaza coast. It appears decreasingly likely, however, that the eight boats now preparing to sail will ever be able or allowed to leave port.

Echoing a majority view among participants here, Johnny Leo Johansen, a ponytailed Norwegian photographer and activist, put it this way: “It’s like they’ve moved the blockade from Gaza to Greece.”

The coast guard stopped the American boat, “The Audacity of Hope,” about one mile out to sea, quashing the initial excitement of the passengers, who were surprised to have been allowed to leave the harbor at all.

“We could see the handwriting on the wall, that they were going to try to shut down all the ports across the Mediterranean,” said Ann Wright, the lead organizer of the American boat.

After a complaint about improper documentation filed by an Israeli advocacy group, the boat had been held in port outside Athens on police orders. Inspectors visited it a week ago Friday, but the results of their inspection had yet to be provided. Without them, the ship could not legally set sail.

On Friday, the Greek Ministry of Citizen Protection decreed that all vessels in Greek ports were prohibited from sailing toward “the maritime area of Gaza.” No explanation was given, and ministry officials could not be reached for further comment.

The Americans decided to leave just the same. After chasing them down, a smiling, youthful coast guard captain leaned out his window and requested the ship’s inspection papers. Passengers leaned over the upper-deck railing of the American boat, chanting, “Let us sail to Gaza!” Others held a cardboard sign asking, “Is it Poseidon or Netanyahu?” (That is, a passenger explained, “Who is the king of the Aegean?”)

“The probability that the Greek government has already made a decision to not let us out of the port is probably quite high, I would think,” Ms. Wright said earlier this week. “It’s not surprising, in a way, that the Greek government has succumbed to the pressure.” She further suggested that Greece, in the throes of a protracted sovereign debt crisis, might be acceding to an Israeli “diplomatic offensive.”

The Israeli government, she noted, had held cabinet meetings on the subject of the flotilla, and several rounds of military exercises have been conducted in preparation for a confrontation. “I’m shocked that they would be spending so much time, money, energy,” Ms. Wright added, but in some ways, she has been pleased by the Israeli attention. “We couldn’t have dreamed for a better thing. Usually, governments don’t cooperate with us this way!”

On Thursday, Irish organizers announced they had pulled their Turkish-docked ship from the flotilla after the crew discovered damage to the propeller shaft, the result of what they assume to have been sabotage by underwater divers. Organizers said that the damage was discovered on a trial run, but that otherwise the vessel would have sunk at sea, endangering the passenger and crew.

Activists discovered nearly identical damage to a Greek-Swedish-Norwegian passenger boat earlier this week. That boat is now grounded for repairs, which are not expected to be completed before next week, organizers say.

Three boats with passengers principally hailing from Canada, Spain and the Netherlands were awaiting clearance to sail on Friday, and a cargo vessel was hoping to be permitted to load its cargo. All of the ships have ostensibly met the requirements of Greek authorities, according to Adam Shapiro, a flotilla organizer and spokesman.

But on Thursday, harbor officials barred a French boat from refueling, he said, an indication that Greek officials might find other justifications for retaining the other ships in port.

As of Friday morning, after more than a week in ports across Greece, no single ship appeared to have explicit clearance from the Greek authorities to set sail; like the American boat, a Greek-Swedish-Norwegian cargo ship was under police order to remain in port.

Organizers said the delays were not completely unanticipated, though they had hoped to meet less resistance. Should the vessels be permitted to sail, or if they depart unauthorized, organizers hope to rendezvous next week at a fixed location in the Mediterranean. But it remains unclear when more ships might set sail, or what an eventual flotilla might resemble.

“We’re going to do something,” Mr. Shapiro vowed. Still, he added, “It seems we’re already doing something, given the kind of response we’ve gotten.”

Asked about activists’ allegations that Israel was behind the apparent sabotage, Mark Regev, a spokesman for Israeli prime minister Benjamin Netanyahu, said: “These activists are not renowned for being an objective source of information.”

“These people have a tendency to blame Israel, to see Israel’s hand behind every calamity,” he went on. “And of course that cannot be true.” But when asked to deny their claims more categorically, he declined.

On Thursday, Prime Minister Netanyahu said in a speech that “sometimes, we not only need to deflect our enemies’ physical attacks, but also deflect the attack on our right to protect ourselves.” Speaking at the Israeli Air Force flight school graduation ceremony, Mr. Netanyahu thanked world leaders who in recent days had spoken out and acted “against the provocation flotilla,” and specifically commended the Greek prime minister George Papandreou, who he said has been closely cooperating with Israel in coordinating the moves related to the flotilla.

On Democracy Now! the Consul General of Israel in New York, refuses to deny Israeli role in the sabotage of flotilla boats: