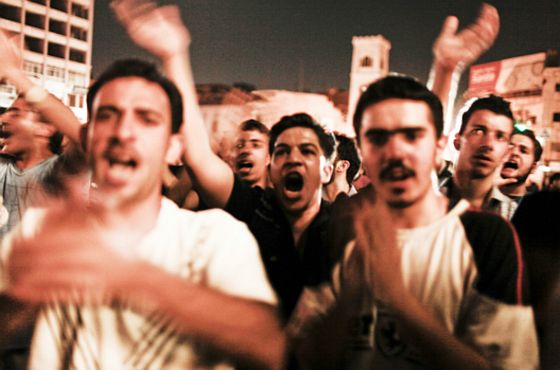 It was past 11 a.m., and Abdullah was finally waking up. The night before had gone late, he and his friends challenging and daring and fleeing from the feared mukhabarat, Syria’s secret police, who for the past five months have been bent on crushing dissent here in Homs. With a few hours of sleep behind him, Abdullah rolled off his mattress and began tapping out details of their exploits on his laptop. The clashes had been fierce and lasted hours, past the muezzin’s call to prayer at dawn. “We won’t bow to anyone but God,” the protesters declared. The mukhabarat replied with tear gas, buckshot and bullets. “Hot” was how Abdullah described it as he typed.

As safe houses go, the room he slept in was lavish. A wide-screen television shared space on the wall with framed Koranic verses, rendered in sloping gold script. The hot wind of the Syrian summer billowed the thick drapes like sails in a storm. There was a mattress for each of the four men, all in their 20s, who slept surrounded by their smartphones and laptops and satellite phones and speakers.

Abdullah, a 26-year-old computer engineer and pious Muslim, is a wanted man. He joined the first protest in Homs in March, and since then he has emerged as one of the dozen or so leaders of the youth resistance. His savvy with technology has made him a target for the police, and this was the fifth place he had slept in in less than a week. He hadn’t been to his family’s home in two months. Around his neck he wore a tiny toy penguin that was actually a thumb drive, which he treated like a talisman, occasionally squeezing it to make sure it was still there. I sat next to him on the mattress and watched as he traded messages with other activists on Skype, then updated a Facebook page that serves as an underground newspaper, then marked a Google Earth map of Homs with the spots of the latest unrest. “If there’s no Internet,” Abdullah said, “there’s no life.”

The other young men in the room began to stir. Abdullah’s friend Iyad (last names of the activists will not be used, in order to protect their identities), brought in tea and emptied ashtrays. They all soon started talking with an excitement that belied the danger to which they have grown accustomed. By day, a measure of normal life unfolds in Homs: stores and government offices are open, and people go about their business. Checkpoints have proliferated, though, and the most active youth try to stay off the streets, worrying that they are easier to identity in the daylight. By night, they gather in scores, sometimes in the hundreds, in open defiance of the regime. In Iyad’s living room, they bragged about spreading nails in the streets to flatten the tires of security-force vehicles and described to me how they load onions into plastic pipes and fire them by igniting hair spray. When security forces surged toward one of their comrades, they shouted to him: “You’ve got 20 guys around you! Blow yourself up!”

“They just fled,” Abdullah said, smiling as he recalled the security forces retreating in fear from the imaginary explosives.