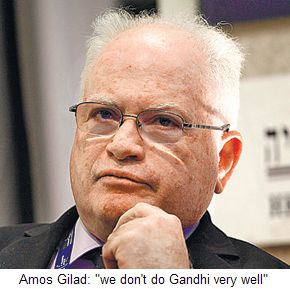 In a new wikileaks cable, Director of Policy and Political-Military Affairs at the Israel Ministry of Defense, Maj. General (reserves) Amos Gilad, told American government officials, ‘we don’t do Gandhi very well’ in reference to unarmed demonstrations taking place throughout the West Bank and specifically in Nabi Saleh. The cable confirms that the Israeli army has, in recent months, decided to increase violent pressure on the demonstrations ‘even [if the] demonstrations appear peaceful.’

In the cable, titled “IDF PLANS HARSHER METHODS WITH WEST BANK DEMONSTRATIONS” and labeled confidential, the Israeli army is portrayed as fed up with the demonstrations and likely to engage in harsh repression if the demonstrations continue or grow.

¶1. (C) In meetings with U.S. officials on February 4, OC
Central Command MG Avi Mizrachi expressed frustration with
on-going demonstrations in the West Bank, which he believes
are being orchestrated to increase tensions. Mizrachi, whose
area of responsibility includes all of the West Bank and
Central Israel, warned that the IDF will start to be more
assertive in how it deals with these demonstrations, even
demonstrations that appear peaceful.

¶2. (C) After visiting two of these “so-called peaceful
demonstrations,” Mizrachi said he did not know what they were
about; the villages were not near the barrier and they had no
problems with movement or settlers. Mizrachi asserted that
the Palestinian villagers also do not know the reason for the
demonstrations and said that they were only demonstrating
because they were told to do so.

¶3. (C) Mizrachi warned that he will start sending his trucks
with “dirty water” to break up these protests, even if they
are not violent, because they serve no purpose other than
creating friction. (NOTE: dirty water is a reference to the
IDF’s chemically treated water that duplicates the effects of
skunk spray. End note.) Mizrachi said he heard rumors that
Palestinian PM Salam Fayyad was planning to attend one of
these protests, adding that if Fayyad gets sprayed with dirty
water, it will make everyone look bad.

¶4. (C) On orders from Mizrachi, West Bank commander BG
Nitzan Alon and West Bank civil administrator BG Poli
Mordechi reportedly met with the Palestinian security force
commanders recently to deliver a strong message that they
must stop these demonstrations or the IDF will. Mizrachi
asserted that he would prefer not to break up these
demonstrations, but will if he must. Many of the
demonstrations are organized by “suspicious people,” Mizrachi
said, and he plans on arresting organizers of demonstrations
that “serve no purpose” beyond exciting the population.

¶5. (C) COMMENT: Less violent demonstrations are likely to
stymie the IDF. As MOD Pol-Mil chief Amos Gilad told USG
interlocutors recently, “we don’t do Gandhi very well.” The
IDF impatience with these demonstrations may also be
connected to the recent arrests of foreign NGO workers with
expired or solely tourist visas who have been attending, and
often organizing, the protests. The GoI reportedly ceased
issuing B1 work visas to the foreign staff of NGOs working in
the occupied territories; for several months now it has
restricted them and their families to B2 visitor visas with
varying durations and sometmies limited to single-entry. On
February 10, officials from the MOI immigration enforcement
unit (the “Oz” unit) told PolOff that they made the arrests
of NGO workers in the West Bank at the request of the IDF.
However, the court ruled that the Oz unit cannot operate
beyond the Green Line, and subsequently released the
detainees, who were mostly European. The Oz unit officials
told PolOff that they will not challenge that ruling and have
no further operations planned in the West Bank. END COMMENT.
Cunningham

2 thoughts on “Wikileaks: Israeli army thinks violence is the best response to non-violence”