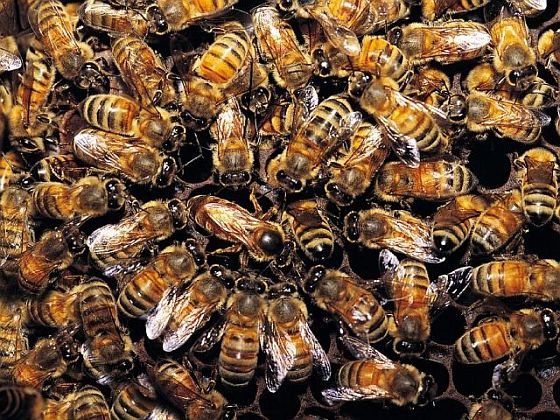 Joseph Castro reports: Honeybees choose new nest sites by essentially head-butting each other into a consensus, shows a new study.

When scout bees find a new potential home, they do a waggle dance to broadcast to other scout bees where the nest is and how suitable it is for the swarm. The nest with the most support in the end becomes the swarm’s new home.

But new research shows another layer of complexity to the decision-making process: The bees deliver “stop signals” via head butts to scouts favoring a different site. With enough head butts, a scout bee will stop its dance, decreasing the apparent support for that particular nest.

This process of excitation (waggle dances) and inhibition (head butts) in the bee swarm parallels how a complex brain makes decisions using neurons, the researchers say.

“Other studies have suggested that there could be a close relationship between collective decision-making in a swarm of bees and the brain,” said Iain Couzin, an evolutionary biologist at Princeton University, who was not involved in the study.”

When honeybees outgrow their hive, several thousand workers leave the nest with their mother queen to establish a new colony. A few hundred of the oldest, most experienced bees, called scout bees, fly out to find that new nest.

“They then run a popularity contest with a dance party,” said Thomas Seeley, a biologist at Cornell University and lead author of the new study. When a scout bee finds a potential nest site, it advertizes the site with a waggle dance, which points other scouts to the nest’s location. The bees carefully adjust how long they dance based on the quality of the site.”

“We thought it was just a race to see which group of scout bees could attract a threshold number of bees,” Seeley told LiveScience. [Bees Form Better Democracy]

But in 2009, Seeley learned that there might be more to the story. He discovered that a bee could produce a stop-dancing signal by butting its head against a dancer and making a soft beep sound with a flight muscle. An accumulation of these head butts would eventually cause the bee to stop dancing. Seeley observed that the colony used these stop signals to reduce the number of bees recruited to forage from a perilous food source, but he wondered if the bees also used the head butts during nest hunting.