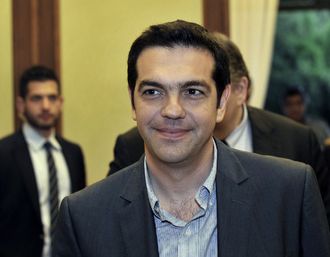 The Guardian reports: “I don’t believe in heroes or saviours,” says Alexis Tsipras, “but I do believe in fighting for rights … no one has the right to reduce a proud people to such a state of wretchedness and indignity.”

The man who holds the fate of the euro in his hands – as the leader of the Greek party willing to tear up the country’s €130bn (£100bn) bailout agreement – says Greece is on the frontline of a war that is engulfing Europe.

A long bombardment of “neo-liberal shock” – draconian tax rises and remorseless spending cuts – has left immense collateral damage. “We have never been in such a bad place,” he says, sleeves rolled up, staring hard into the middle distance, from behind the desk that he shares in his small parliamentary office. “After two and a half years of catastrophe, Greeks are on their knees. The social state has collapsed, one in two youngsters is out of work, there are people leaving en masse, the climate psychologically is one of pessimism, depression, mass suicides.”

But while exhausted and battle weary, the nation at the forefront of Europe’s escalating debt crisis and teetering on the edge of bankruptcy is also hardened. And, increasingly, they are looking towards Tsipras to lead their fight.

“Defeat is the battle that isn’t waged,” says the young politician who almost overnight has seen his radical left coalition party, Syriza, jump from representing fewer than 5% of Greeks to enjoying ratings of more than 25% in polls.