Paul McGeough writes: Grand Ayatollah Ali Sistani is rarely seen. The most revered spiritual leader for the world’s 170 million Shiite Muslims, he hardly ever speaks in public. Some 90 miles south of Baghdad, in Najaf, the seat of Shiite religious power, people say that in the last few years the 82-year-old Sistani has grown frail and relies increasingly on one of his sons to carry out his duties. “He’s a weak old man; soon he might have to go to London for more treatment,” a local student of religious politics says. (Like most who were interviewed for this report, the student wished to remain anonymous.)

As Sistani ages, a struggle to succeed him has begun, putting the spiritual leadership of one of the world’s foremost faiths in play. But with neighboring Iran moving to install its preferred candidate in the position, the secular political foundations of Iraq’s fledgling democracy are at risk. Consequently, what amounts to a spiritual showdown could pose a challenge to Washington’s hope for postwar Iraq to serve as a Western-allied, moderate, secular state in the heart of the Middle East. 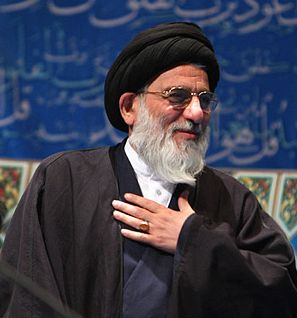 Shia doctrine requires that an incumbent die before jockeying can begin in a succession process that is as opaque as it is informal. But Mahmoud Hashemi Shahroudi, the 64-year-old cleric who is widely seen as Tehran’s preferred choice, has jumped the gun by sending an advance party to open an office in Najaf. This cohort works from a dust-coated building, painted in banded tones of white and salmon, just a couple of blocks from Sistani’s office and home. On a recent visit, a scattering of shoes and sandals at the entrance suggested a gathering within, but a man who came to the door makes it clear: “We apologize, but we can’t meet any journalists.”

Without so much as setting foot in Najaf, Shahroudi is rolling out a sophisticated and expensive campaign — reputedly bankrolled by Tehran. Key to Shahroudi’s strategy has been luring Sistani and his followers into a costly bidding war for clerical loyalty. Clerics and seminarians are being offered an assortment of stipends, housing, and health services in the hope that they can be swayed.

A Najafi by birth, Shahroudi has lived much of his adult life in Iran. Under the patronage of Iran’s supreme leader, Ayatollah Ali Khamenei, he rose to the top tiers of Iran’s religious and political establishment. And in recent months Shahroudi has had several meetings with Iraqi Prime Minister Nouri al-Maliki, most recently in Tehran in April. According to sources close to the religious and political leadership in Baghdad, Shahroudi has already informed some key Iraqi officials that he is positioning himself to take the spiritual helm of Shia Islam.

“Without Khamenei’s support, he could not dream of doing this,” a diplomat from the region who is based in Baghdad, and who spoke on condition of anonymity, says. Because of Shahroudi’s stature in Iran, the diplomat says, he will always be seen as Tehran’s candidate: “It is [Iranian] money and authority that’ll make him Grand Ayatollah.”

Shahroudi’s challenge sets in conflict two opposing views of politics in Shiism. Iraqi Shiites have long held to the so-called quietist school of thought, a doctrine known more expansively as irshad wa tawjeeh, which translates as “guidance and direction” and is rooted in a sixteenth-century deal with the Persian monarchy by which the clerics of the day opted to remain above the political fray. Sistani’s interventions in the early days of the U.S. occupation of Iraq were arguably a glaring exception to quietest thinking, but the ayatollah’s singular objective at the time was to bend the will of the Americans in shaping a political process from which he and the clergy would ultimately step back. Now, Iraqis have had nearly a decade to judge contemporary application of Najaf’s quietist theory.

In Iran, however, the 1979 revolution gave holy men full control of the political process. Although more than three messy decades of Islamic rule have stripped the varnish from wilayat al-faqih, “guardianship of the Islamic jurists,” the revolutionary Ayatollah Ruhollah Khomeini’s constitutionally enshrined theory that God’s authority is vested in the supreme leader and senior religious scholars, Tehran continues to insist that politics be guided by faith. [Continue reading…]