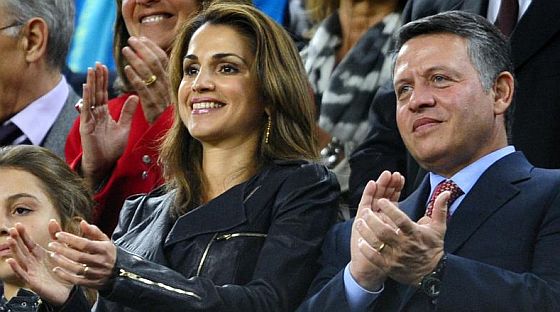 Christopher Dickey reports: The blue-eyed king and beautiful queen of Jordan are facing the biggest crisis of their reign. On Tuesday night, riots and protests broke out in many of the country’s cities. Some in the crowd shouted “the people want the fall of the regime.” Others burned the monarch’s portrait. One longtime supporter of the royals even suggested privately “it’s not a question of if, but when” King Abdullah’s rule will end. That may well be an overstatement. The protests only included a few thousand people all told. But the pressures for truly major political reforms are mounting.

“I think this ushers in the beginning of the end of absolute monarchy, not themonarchy,” says Labib Kamhawi, 61, a former political science professor at Jordan University who is now a spokesman for an umbrella group of opposition parties and movements. (Kamhawi is facing sedition charges from the nervous regime for, as he puts it, “saying what I am saying to you.”)

Monarchies traditionally rely on a mystique that blends bloodlines with patriotism, and throughout history the wisest royals have been those who managed to remain above the fray of day to day politics. The latest riots, which started over a hike in fuel prices, show that the 50-year-old Abdullah is finding that game increasingly hard to play.

One buffer after another between Abdullah and popular anger has fallen away: He has named four prime ministers in the last year alone. His powerful intelligence chiefs have toppled repeatedly since he succeeded to the throne in 1999, as he first relied on them for his survival, then fired them and threw them in prison.  [Continue reading…]