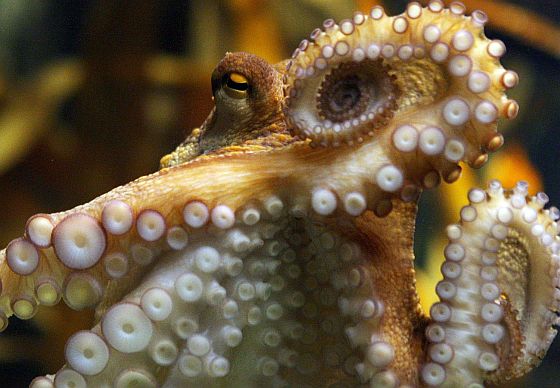 Sy Montgomery: “Meeting an octopus,” writes [professor of philosophy, Peter] Godfrey-Smith, “is like meeting an intelligent alien.” Their intelligence sometimes even involves changing colors and shapes. One video online shows a mimic octopus alternately morphing into a flatfish, several sea snakes, and a lionfish by changing color, altering the texture of its skin, and shifting the position of its body. Another video shows an octopus materializing from a clump of algae. Its skin exactly matches the algae from which it seems to bloom — until it swims away.

For its color palette, the octopus uses three layers of three different types of cells near the skin’s surface. The deepest layer passively reflects background light. The topmost may contain the colors yellow, red, brown, and black. The middle layer shows an array of glittering blues, greens, and golds. But how does an octopus decide what animal to mimic, what colors to turn? Scientists have no idea, especially given that octopuses are likely colorblind.

But new evidence suggests a breathtaking possibility. Woods Hole Marine Biological Laboratory and University of Washington researchers found that the skin of the cuttlefish Sepia officinalis, a color-changing cousin of octopuses, contains gene sequences usually expressed only in the light-sensing retina of the eye. In other words, cephalopods — octopuses, cuttlefish, and squid — may be able to see with their skin.

The American philosopher Thomas Nagel once wrote a famous paper titled “What Is It Like to Be a Bat?” Bats can see with sound. Like dolphins, they can locate their prey using echoes. Nagel concluded it was impossible to know what it’s like to be a bat. And a bat is a fellow mammal like us — not someone who tastes with its suckers, sees with its skin, and whose severed arms can wander about, each with a mind of its own. Nevertheless, there are researchers still working diligently to understand what it’s like to be an octopus.

Jennifer Mather spent most of her time in Bermuda floating facedown on the surface of the water at the edge of the sea. Breathing through a snorkel, she was watching Octopus vulgaris — the common octopus. Although indeed common (they are found in tropical and temperate waters worldwide), at the time of her study in the mid-1980s, “nobody knew what they were doing.”

In a relay with other students from six-thirty in the morning till six-thirty at night, Mather worked to find out. Sometimes she’d see an octopus hunting. A hunting expedition could take five minutes or three hours. The octopus would capture something, inject it with venom, and carry it home to eat. “Home,” Mather found, is where octopuses spend most of their time. A home, or den, which an octopus may occupy only a few days before switching to a new one, is a place where the shell-less octopus can safely hide: a hole in a rock, a discarded shell, or a cubbyhole in a sunken ship. One species, the Pacific red octopus, particularly likes to den in stubby, brown, glass beer bottles.

One octopus Mather was watching had just returned home and was cleaning the front of the den with its arms. Then, suddenly, it left the den, crawled a meter away, picked up one particular rock and placed the rock in front of the den. Two minutes later, the octopus ventured forth to select a second rock. Then it chose a third. Attaching suckers to all the rocks, the octopus carried the load home, slid through the den opening, and carefully arranged the three objects in front. Then it went to sleep. What the octopus was thinking seemed obvious: “Three rocks are enough. Good night!”

The scene has stayed with Mather. The octopus “must have had some concept,” she said, “of what it wanted to make itself feel safe enough to go to sleep.” And the octopus knew how to get what it wanted: by employing foresight, planning — and perhaps even tool use. Mather is the lead author of Octopus: The Ocean’s Intelligent Invertebrate, which includes observations of octopuses who dismantle Lego sets and open screw-top jars. Coauthor Roland Anderson reports that octopuses even learned to open the childproof caps on Extra Strength Tylenol pill bottles — a feat that eludes many humans with university degrees.

In another experiment, Anderson gave octopuses plastic pill bottles painted different shades and with different textures to see which evoked more interest. Usually each octopus would grasp a bottle to see if it were edible and then cast it off. But to his astonishment, Anderson saw one of the octopuses doing something striking: she was blowing carefully modulated jets of water from her funnel to send the bottle to the other end of her aquarium, where the water flow sent it back to her. She repeated the action twenty times. By the eighteenth time, Anderson was already on the phone with Mather with the news: “She’s bouncing the ball!”

This octopus wasn’t the only one to use the bottle as a toy. Another octopus in the study also shot water at the bottle, sending it back and forth across the water’s surface, rather than circling the tank. Anderson’s observations were reported in the Journal of Comparative Psychology. “This fit all the criteria for play behavior,” said Anderson. “Only intelligent animals play — animals like crows and chimps, dogs and humans.” [Continue reading…]