Douglas Hofstadter, author of Gödel, Escher, Bach: An Eternal Golden Braid (GEB), published in 1979, and one of the pioneers of artificial intelligence (AI), gained prominence right at a juncture when the field was abandoning its interest in human intelligence. 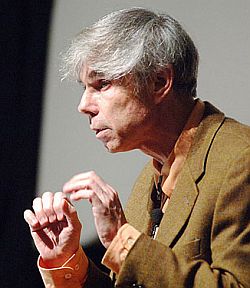 James Somers writes: In GEB, Hofstadter was calling for an approach to AI concerned less with solving human problems intelligently than with understanding human intelligence — at precisely the moment that such an approach, having borne so little fruit, was being abandoned. His star faded quickly. He would increasingly find himself out of a mainstream that had embraced a new imperative: to make machines perform in any way possible, with little regard for psychological plausibility.

Take Deep Blue, the IBM supercomputer that bested the chess grandmaster Garry Kasparov. Deep Blue won by brute force. For each legal move it could make at a given point in the game, it would consider its opponent’s responses, its own responses to those responses, and so on for six or more steps down the line. With a fast evaluation function, it would calculate a score for each possible position, and then make the move that led to the best score. What allowed Deep Blue to beat the world’s best humans was raw computational power. It could evaluate up to 330 million positions a second, while Kasparov could evaluate only a few dozen before having to make a decision.

Hofstadter wanted to ask: Why conquer a task if there’s no insight to be had from the victory? “Okay,” he says, “Deep Blue plays very good chess—so what? Does that tell you something about how we play chess? No. Does it tell you about how Kasparov envisions, understands a chessboard?” A brand of AI that didn’t try to answer such questions—however impressive it might have been—was, in Hofstadter’s mind, a diversion. He distanced himself from the field almost as soon as he became a part of it. “To me, as a fledgling AI person,” he says, “it was self-evident that I did not want to get involved in that trickery. It was obvious: I don’t want to be involved in passing off some fancy program’s behavior for intelligence when I know that it has nothing to do with intelligence. And I don’t know why more people aren’t that way.”

One answer is that the AI enterprise went from being worth a few million dollars in the early 1980s to billions by the end of the decade. (After Deep Blue won in 1997, the value of IBM’s stock increased by $18 billion.) The more staid an engineering discipline AI became, the more it accomplished. Today, on the strength of techniques bearing little relation to the stuff of thought, it seems to be in a kind of golden age. AI pervades heavy industry, transportation, and finance. It powers many of Google’s core functions, Netflix’s movie recommendations, Watson, Siri, autonomous drones, the self-driving car.

“The quest for ‘artificial flight’ succeeded when the Wright brothers and others stopped imitating birds and started … learning about aerodynamics,” Stuart Russell and Peter Norvig write in their leading textbook, Artificial Intelligence: A Modern Approach. AI started working when it ditched humans as a model, because it ditched them. That’s the thrust of the analogy: Airplanes don’t flap their wings; why should computers think?

It’s a compelling point. But it loses some bite when you consider what we want: a Google that knows, in the way a human would know, what you really mean when you search for something. Russell, a computer-science professor at Berkeley, said to me, “What’s the combined market cap of all of the search companies on the Web? It’s probably four hundred, five hundred billion dollars. Engines that could actually extract all that information and understand it would be worth 10 times as much.”

This, then, is the trillion-dollar question: Will the approach undergirding AI today — an approach that borrows little from the mind, that’s grounded instead in big data and big engineering — get us to where we want to go? How do you make a search engine that understands if you don’t know how you understand? Perhaps, as Russell and Norvig politely acknowledge in the last chapter of their textbook, in taking its practical turn, AI has become too much like the man who tries to get to the moon by climbing a tree: “One can report steady progress, all the way to the top of the tree.”

Consider that computers today still have trouble recognizing a handwritten A. In fact, the task is so difficult that it forms the basis for CAPTCHAs (“Completely Automated Public Turing tests to tell Computers and Humans Apart”), those widgets that require you to read distorted text and type the characters into a box before, say, letting you sign up for a Web site.

In Hofstadter’s mind, there is nothing to be surprised about. To know what all A’s have in common would be, he argued in a 1982 essay, to “understand the fluid nature of mental categories.” And that, he says, is the core of human intelligence. [Continue reading…]