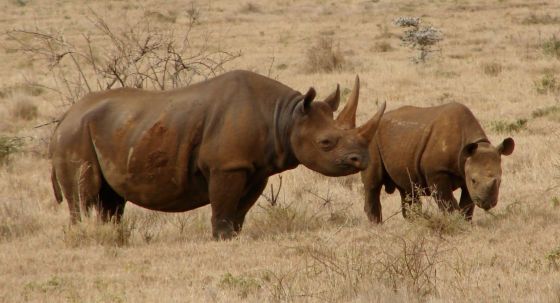 Rachel Nuwer reports: Some large animals influence their surroundings more than others. Elephants are known as ecosystem engineers for their tendency to push over trees and stomp shrubby areas in the savannah into submission. This keeps forests at bay, which otherwise would overtake open grasslands. Wolves, on the other hand, are apex predators. They keep other species like deer in check, preventing herbivore populations from getting out of hand and eating all the plants into oblivion. Both elephants and wolves are keystone species, or ones that have a relatively large impact on their environment in relation to their actual population numbers.

African rhinos, it turns out, also seem to be a keystone species. According to a recent study published by Scandinavian and South African researchers in the Journal of Ecology, rhinos maintain the diverse African grasslands on which countless other species depend.

Surprisingly, prior to this study no one had looked closely rhinos’ roles in shaping the ecosystem. Most researchers focused on elephants instead. Suspecting that these large animals influence their environment, the authors took a close look at rhinos in Kruger National Park in South Africa. [Continue reading…]