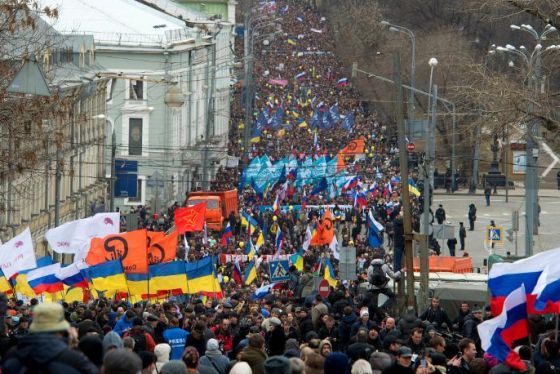 AFP reports: Around 50,000 people rallied in central Moscow Saturday in protest at Russia’s intervention in Ukraine, a day before the Crimean peninsula votes on switching to Kremlin rule.

Waving both Ukrainian and Russian flags and shouting slogans heard during the anti-government protests in Kiev, the demonstrators urged Russian President Vladimir Putin to pull troops back from a Cold War-style confrontation.

Marchers carried placards reading “Putin, get out of Ukraine” and others comparing Russia’s move on Crimea with the Nazi annexation of the Sudetenland as Europe rushed headlong into World War II.

Many of the protesters adopted the chants and slogans of Ukraine’s popular uprising that ousted President Viktor Yanukovych last month.

University professor Yelena Orlova, 47, whose sign read “Ukraine is a sovereign state”, said she did not expect the rally would change her government’s position, but believed it was her duty to speak out.

“I don’t agree with the policy of Putin,” she told AFP. “I am against the annexation of Crimea. I think Russia should respect the borders of Ukraine.” [Continue reading…]

5 thoughts on “50,000 rally in Moscow against Putin’s intervention in Ukraine”