A reader here just left a comment complaining about my “frothing support for the heathens who took Kiev by force,” and said, “I wish the people of Crimea the best and hope the vote tomorrow goes for separation from the u.s. / e.u.”

I can only imagine what kind of Manichean worldview lurks behind the reference to “heathens,” but the general sentiment here seems to one that is not uncommon among stalwart critics of American power. It seems to work like this:

If a prominent political leader antagonizes the U.S. and its European allies (I refer of course to the well-known demons de jour: Fidel Castro, Slobodan Milošević, Hugo Chávez, Mahmoud Ahmadinejad, Muammar Gaddafi, Bashar al-Assad, Vladimir Putin) and that individual is then vilified in the media, the mere fact that this person is being targeted in this way is taken as a sign that he must be doing something right. He symbolizes the rejection of Western hegemony and is conferred honorary membership to a select group of über-rebels who have the courage take a dramatic stand defying Western imperialism.

I am not immune to experiencing this sentiment, since power needs to be poked in the eye occasionally, yet that doesn’t mean that we should ignore the failings of those who are doing the poking.

But that’s what all too often happens when criticism of the US/the West becomes an obsession: it makes authoritarian rule become excusable.

To anyone who thinks that tomorrow the people of Crimea are about to release themselves from the stifling grip of European influence in exchange for a warm embrace from Russia, I simply ask: who do you imagine you would have felt more comfortable marching alongside in Moscow today?

The disciplined young men in the “Brotherhood and Civil Resistance March,” or with activists like Ilya Yashin who have the guts to say: “We are patriots and Putin is Russia’s enemy”? 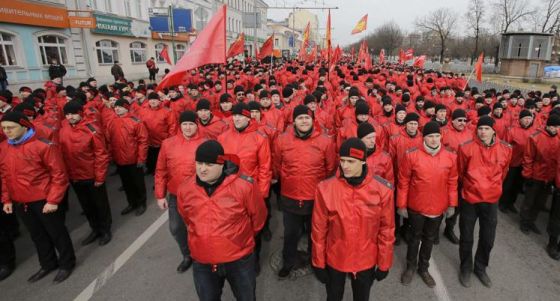 Reuters: “The pro-Russian patriotic procession was held to express support to Russian speakers living in Crimea and Ukraine and protest against the policies conducted by new Ukrainian authorities, according to organisers.”

4 thoughts on “Which march would you join?”