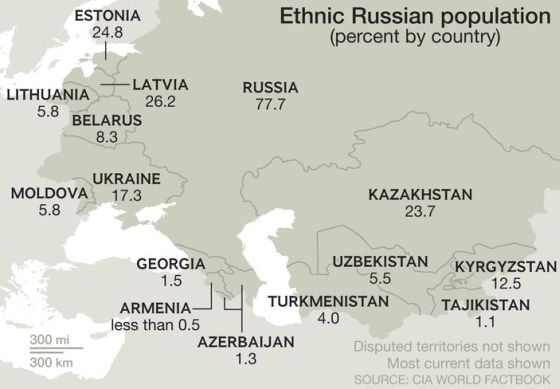 National Geographic: It’s been more than 20 years since the disintegration of the U.S.S.R., but the effect of that breakup on its people remains a daily reality for many. Almost overnight, some 25 million ethnic Russians became a diaspora. By 2003, about eight million of them were reabsorbed by Russia. About half of that number came from Central Asia, where relations between Russians and the indigenous Turkic nationalities were often strained.

Relations have also been fraught with difficulty in the Baltic countries where ethnic Russians have been particularly vocal about feeling disenfranchised after independence. About one-third of ethnic Russians living in Latvia are considered “non-citizens” and not allowed certain rights, including the right to vote or hold office. The country has been reprimanded by the UN for failing to encourage integration, yet, at the same time, intermarriage between ethnic Latvians and Russians has increased after independence despite official tensions. Intermarriage has long been common between ethnic Russians and Ukrainians as well — yet another factor that could complicate identity issues as parts of Ukraine vote on whether to secede.

Are there other post-Soviet countries with large Russian populations that could soon face the kind of upheaval that Crimea and eastern Ukraine are experiencing? Historian [Alexei] Miller says the answer doesn’t just lie in where you can find ethnic Russians on a map — but also on whether the Kremlin might benefit from becoming entangled in yet another crisis.

“What Putin is doing in Ukraine is not caused by the wish to save Russians but by geo-strategic motives,” Miller says, adding that Russia’s motivations may be much like those of the U.S. when it says it is fighting for democracy—in countries that happen to have oil riches. The question other former republics must ask, he says, is, “Do we really treat Russians fairly enough, and does Putin have enough important strategic interests in our country to use discrimination of Russians as an instrument of his involvement?”