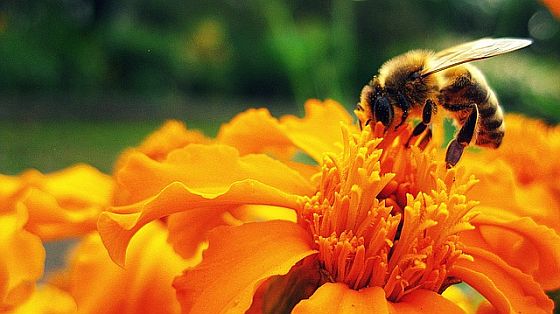 The Guardian reports: Sexual deceit, pressed flowers and Victorian bee collectors are combined in new scientific research which demonstrates for the first time that climate change threatens flower pollination, which underpins much of the world’s food production.

The work used museum records stretching back to 1848 to show that the early spider orchid and the miner bee on which it depends for reproduction have become increasingly out of sync as spring temperatures rise due to global warming.

The orchid resembles a female miner bee and exudes the same sex pheromone to seduce the male bee into “pseudocopulation” with the flower, an act which also achieves pollination. The orchids have evolved to flower at the same time as the bee emerges.

But while rising temperatures cause both the orchid and the bee to flower or fly earlier in the spring, the bees are affected much more, which leads to a mismatch.

“We have shown that plants and their pollinators show different responses to climate change and that warming will widen the timeline between bees and flowers emerging,” said Dr Karen Robbirt, at the Royal Botanic Gardens, Kew and the University of East Anglia (UEA). “If replicated in less specific systems, this could have severe implications for crop productivity.”

She said the research, published in Current Biology on Thursday, is “the first clear example, supported by long-term data, of the potential for climate change to disrupt critical [pollination] relationships between species.” [Continue reading…]