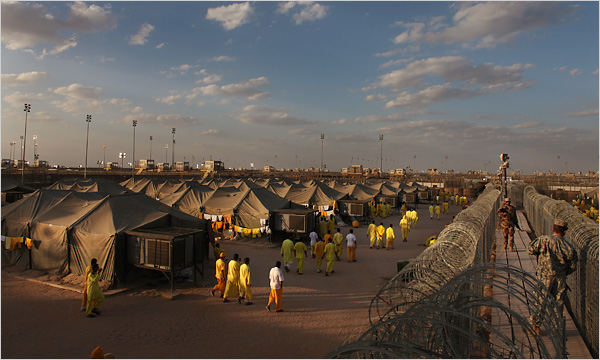 The Washington Post reports: In March 2009, in a wind-swept sliver of Iraq, a sense of uncertainty befell the southern town of Garma, home to one of the Iraq war’s most notorious prisons. The sprawling Camp Bucca detention center, which had detained some of the war’s most radical extremists along the Kuwait border, had just freed hundreds of inmates. Families rejoiced, anxiously awaiting their sons, brothers and fathers who had been lost to Bucca for years. But a local official fretted.

“These men weren’t planting flowers in a garden,” police chief Saad Abbas Mahmoud told The Washington Post’s Anthony Shadid, estimating that 90 percent of the freed prisoners would soon resume fighting. “They weren’t strolling down the street. This problem is both big and dangerous. And regrettably, the Iraqi government and the authorities don’t know how big the problem has become.”

Mahmoud’s assessment of Camp Bucca, which funneled 100,000 detainees through its barracks and closed months later, would prove prescient. The camp now represents an opening chapter in the history of the Islamic State — many of its leaders, including Abu Bakr al-Baghdadi, were incarcerated and probably met there. According to former prison commanders, analysts and soldiers, Camp Bucca provided a unique setting for both prisoner radicalization and inmate collaboration — and was formative in the development of today’s most potent jihadist force. [Continue reading…]

The Soufan Group: It is likely that many of the soon-to-be leaders of what is now the Islamic State (IS) were extremists before they walked through the gates of Camp Bucca, the U.S. military prison in southern Iraq, from 2003 to 2009. But it is certain that they all were when they walked out months or years later.

In Camp Bucca, the reshaping of the future IS took place among the mixing of violent ideological extremists and former Ba’athist military officers who were also no strangers to violence. Along with other circumstances (such as the Syrian civil war and the sectarian rule of Iraq’s then-Prime Minister Nuri al-Maliki), it is this Bucca bond that forms the nucleus of a cancerous cell that has taken over so much of Iraq and Syria.

Apart from IS leader Abu Bakr al-Baghdadi, even a partial list of former Bucca detainees who would play major roles in reshaping IS is impressive: Abu Muslim al-Turkmani, al-Baghdadi’s number two; Abu Ayman al-Iraqi, senior military leader; Haji Bakr, instrumental in helping al-Baghdadi into power; Abu ‘Abdul Rahman al-Bilawi, responsible for the operational planning that seized Mosul, Iraq; Abu Qasim, in charge of foreign fighters and suicide bombers; Abu Lu’ay, senior military official; Abu Shema, in charge of logistics; Abu Suja, in charge of programs for families of martyrs; and on and on. Some were officers in Saddam Hussein’s military (usually air force or army), the others were teachers, imams, or bureaucrats. But all were dedicated, motivated, and organized members of a smoldering anti-Shi’a group when they left Bucca. [Continue reading…]