[Note to readers who arrive here from Google: This map was created based on information from Sept. 5 for Syria and Aug. 20 for Iraq, 2014. By early 2015, the military campaign against ISIS had resulted in the group suffering small territorial losses in Iraq while making gains in Syria. A more recent map can be viewed here.]

Reuters has produced the most detailed map of Syria and Iraq that I’ve seen thus far showing populated areas where a government or non-state armed group is dominant or control is contested.

Maps shown on TV and elsewhere are often misleading because they usually depict vast areas of uninhabited desert being under ISIS control when in fact these are areas essentially outside any human control.

Whether the Reuters map is as accurate as it is detailed is hard to say and as with all these kinds of maps, they can do no more than attempt to represent a moment in time (Sept. 5 for Syria and Aug. 20 for Iraq) in an environment where the lines of control are continuously shifting.

One of the interesting features of this map is that it indicates that the area of the region under Kurdish control (Rojava and Iraqi Kurdistan) extends as widely as the area under ISIS control.

Kobane is located in the small blue circle at the top of the largest patch of red. (Click on the image to see a larger version and click on that to make it even larger.) 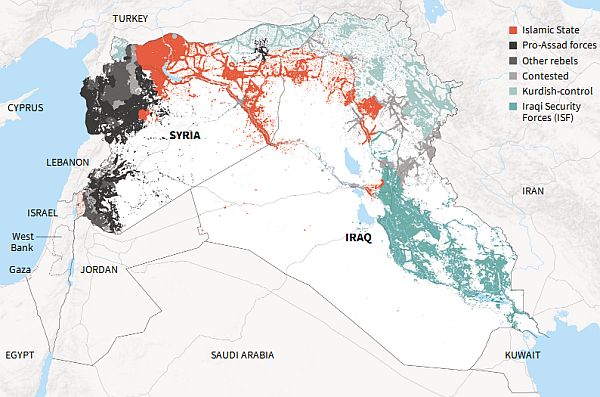 This map comes from a collection of graphics Reuters has compiled on the U.S.-led military campaign against ISIS.

Contrast Reuters’ commendable work with an ocean-of-blood map that CNN used in June: