The Daily Mail reports: A hacking threat against CNN that rose to the FBI attention is actually a hoax, claims a freelance writer from Tennessee who is claiming responsibility for the post.

David Garrett Jr., from Nashville, says he we the one who posted to the anonymous site ‘pastebin’ claiming to be Sony hackers the ‘Guardians of Peace.’ It included the bizarre demand that CNN should turn over anchor Wolf Blitzer.

It is believed that the FBI issued a Joint Intelligence Bulletin based on that post that warned CNN and other media companies that hack attacks could be in the works.

Mr Garrett, who rights[sic] about security issues for Examiner.com, revealed himself on Twitter today after news media organizations, including Daily Mail Online, picked up the story about the FBI warning.

‘My fake pastbin post is being investigated by the FBI. I wrote for CNN to “give us the Wolf” and the FBI is actually taking it as a threat,’ he tweeted.

‘It was a joke. And to show that no one investigates anything. Everything is rumors. I had no idea it would be taken seriously.’

After Sony, which news organization is next? Jana Winter strikes again, for The Intercept. http://t.co/l8Bm1bCXyE

At this time The Intercept has so far failed to correct or update its original report: 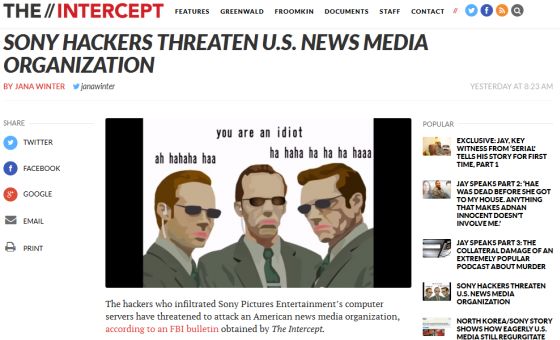