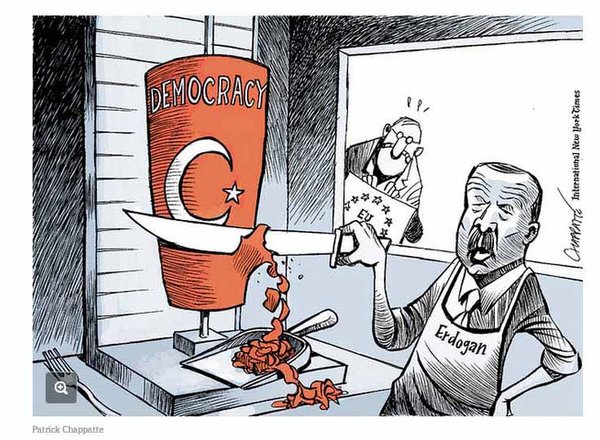 A protester who held up this image, published in The International New York Times, has been questioned by the police.

The New York Times reports: In the cartoon, an image of Recep Tayyip Erdogan stands watch while two thieves empty a safe full of cash. “No need to rush,” one of the thieves says with a grin. “We have a holographic watchman,” he adds.

The message in the cartoon, published in February in Cumhuriyet, an opposition newspaper, was unmistakable, coming as members of the Turkish leader’s inner circle were targeted in a corruption investigation.

Mr. Erdogan was not amused. The offending cartoonist, Musa Kart, who had a history of drawing cartoons critical of Mr. Erdogan, was taken to court on charges of insulting the prime minister (now the president), violating the privacy of an investigation and committing libel. Mr. Kart was acquitted in October, leaving him free, for the moment — Mr. Erdogan’s lawyer has appealed the decision — to keep challenging authority with his caricatures of Turkey’s rich and powerful.

“This repetitive cycle of legal actions affects all cartoonists, writers, intellectuals in this country,” Mr. Kart said. “We will continue to work and express what we think for the good of our future generations.”

But the episode points to an increasingly difficult environment for editorial cartoonists, who have long been a staple of Turkey’s political culture, as Mr. Erdogan has shown less tolerance for criticism and dissent. Critics of Mr. Erdogan and his government have found themselves embroiled in criminal lawsuits while dozens have lost their jobs — victims, critics say, of government efforts to intimidate dissidents. [Continue reading…]