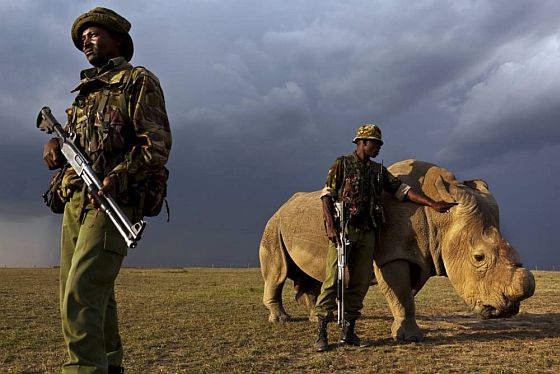 Jonathan Jones writes: What is it like to look at the very last of something? To contemplate the passing of a unique wonder that will soon vanish from the face of the earth? You are seeing it. Sudan is the last male northern white rhino on the planet. If he does not mate successfully soon with one of two female northern white rhinos at Ol Pejeta conservancy, there will be no more of their kind, male or female, born anywhere. And it seems a slim chance, as Sudan is getting old at 42 and breeding efforts have so far failed. Apart from these three animals there are only two other northern white rhinos in the world, both in zoos, both female.

It seems an image of human tenderness that Sudan is lovingly guarded by armed men who stand vigilantly and caringly with him. But of course it is an image of brutality. Even at this last desperate stage in the fate of the northern white rhino, poachers would kill Sudan if they could and hack off his horn to sell it on the Asian medicine market.

Sudan doesn’t know how precious he is. His eye is a sad black dot in his massive wrinkled face as he wanders the reserve with his guards. His head is a marvellous thing. It is a majestic rectangle of strong bone and leathery flesh, a head that expresses pure strength. How terrible that such a mighty head can in reality be so vulnerable. It is lowered melancholically beneath the sinister sky, as if weighed down by fate. This is the noble head of an old warrior, his armour battered, his appetite for struggle fading. [Continue reading…]