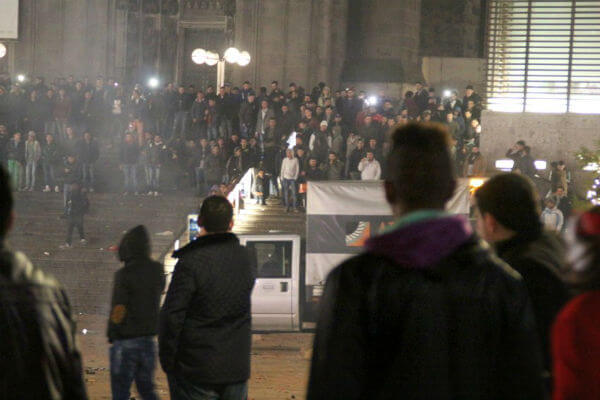 On New Year’s Eve, as many as 1,000 young men who according to police and witnesses were of north African and Arab appearance, took part in mass sexual violence and assaults on women outside the railway station in the German city of Cologne. BBC News reports that more than 100 women and girls have come forward with reports of sexual assault and robbery.

One victim, named as Busra, spoke of a sense of lawlessness outside the station, where the attackers felt they could do as they pleased.

“They felt like they were in power and that they could do anything with the women who were out in the street partying,” she said.

“They touched us everywhere. It was truly terrible.”

One of the most obvious parallels that is now being drawn is with the mass sexual assaults in Cairo that, as The Guardian reported in 2013, “have been endemic at Tahrir protests since at least the 2011 revolution”.

An internal report by Germany’s national police, the Bundespolizei, obtained by Der Spiegel, lists police officers’ experiences including one who quoted a suspect as saying: “I’m a Syrian! You have to treat me kindly! Mrs. Merkel invited me.”

Cologne’s mayor, Henriette Reker, has drawn scorn by suggesting that young women and girls need to protect themselves by adopting a code of conduct which includes, as The Independent reports, “maintaining an arm’s length distance from strangers, to stick within your own group, to ask bystanders for help or to intervene as a witness, or to inform the police if you are the victim of such an assault.”

As the accounts of victims of the attacks make clear, such a code would have been impossible to adopt on New Year’s Eve:

One woman, whose identity has been protected, told German television how gangs of men assaulted her in the crowd.

“All of a sudden these men around us began groping us,” she said. “They touched our behinds and grabbed between our legs. They touched us everywhere.

“So my girlfriend wanted to get out of the crowd. When I turned around one guy grabbed my bag and ripped it off my body.”

She said she felt in extreme danger, but there were no police officers to help.

“I thought to myself that if we stay here in this crowd they could kill us, they could rape us and nobody would notice. I thought we simply had to accept it.

“There was no one around us who helped or was in a position to help. All I wanted was to get out.

In another account reported by BBC News, a 17-year-old British girl described what she witnessed:

I was at Cologne on New Year’s Eve with my boyfriend. Upon arriving at 10pm at the train station, I felt afraid the moment I saw the strange behaviour of the people around me.

The main station was full of wobbly teenagers and young adults, of all ages, some possibly below 18, very drunk and unaware of their whereabouts. Some had already passed out on the floor in their own vomit.

Bottles were smashed on the ground and you could feel shards of glass crunching beneath your feet with every step.

Fights had taken place in the station and police were trying to contain them, but the amount of fighting made it difficult for the police to focus on every individual dispute.

We walked towards the exit of the station towards the cathedral, only to be welcomed by a huge crowd blocking the exits.

We heard a woman screaming and crying somewhere in the midst of this crowd, appearing to be escaping from a foreign man, who was shouting back and pointing his finger at her and chasing her with his accomplices.

Later on, we saw two men corner women at the cathedral and touch them while they were screaming for help and trying to fight back.

For those in Europe and North America who want to gin up fears of immigrants and refugees, the events in Cologne will seem to demonstrate that their fears are warranted, that Donald Trump’s proposed ban on Muslims is justifiable, and that those of us who repeat the slogan, “refugees welcome!” are naive.

Understandably, the attacks have sent shock-waves through Germany.

In an interview by Human Rights Watch reporting on sexual violence in Egypt in 2013, a young man in typical Western attire with gelled hair, says: “It’s not a good habit, it’s wrong, but they [women] lead us to do this. From the way they dress. From the way they walk. Everything. They push Egyptian men to do this.”

A young woman, in hijab, says: “It has happened to me several times but I don’t always react, because I’m afraid of the reaction from the guy in front of me. And I’m afraid the people around me won’t back me up.”

Many Egyptian men, including members of the police force, either downplay or shrug off sexual harassment, reflecting popular views that women either should remain at home or bring trouble on themselves by dressing provocatively if they go out on the street.

“She can’t go anywhere without me,” Capt. Ahmed Mahmoud, a police officer in a working-class Cairo neighborhood, told the Huffington Post in May, speaking about his wife. “If a woman is wearing provocative clothing, the change needs to come from her.”

If this blame-the-victim mentality represented a distinctive feature of Middle Eastern societies, it might be difficult to counter the arguments being made by those in the West who want to block the entry of refugees, especially young men.

The fact is, however, that a pandemic of sexual violence involves the same factors:

The perpetrators of most of this violence are not mobs on the rampage; they are the victims’ own intimate partners.

Both on the streets and behind closed doors, alcohol is often a contributing factor.

A 2014 report by the European Union Agency for Fundamental Rights which found that an estimated 3.7 million women in the EU had been the targets of sexual violence during the preceding 12 months, noted:

In the 1991 Tailhook scandal involving the U.S. Navy and Marines, 83 women and seven men were victims of sexual assault and harassment. The 4,000 attendees in Las Vegas “viewed the annual conference as a type of ‘free fire zone’ wherein they could act indiscriminately and without fear of censure or retribution in matters of sexual conduct or drunkenness,” according to a Pentagon investigation.

While cultural factors in sexual violence should not be ignored, there are ultimately two reasons why this kind of conduct is so commonplace:

Those who now claim that in defense of “our women” we need to guard against a foreign threat, are choosing to ignore the fact that the far more pervasive threat is much closer to home in the familiar face of a former boyfriend, an ex-husband, boyfriend, husband, father, step-father, brother, cousin, friend, or a neighbor.

Guys, the collective failure here is ours.