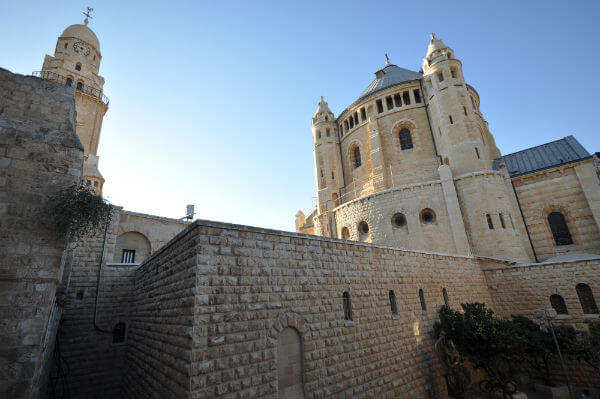 Reuters reports: Israel ordered a high-priority police investigation on Sunday into anti-Christian messages scrawled in Hebrew on the walls and doors of a Jerusalem monastery, saying they marked an assault on religious harmony.

“Idols will be extirpated” – a line lifted from the Jewish prayer service – and “Christians Go to Hell” were among graffiti left outside the Dormition Abbey with felt-tip pens. The varying handwriting suggested several vandals had been involved.

The Benedictine monastery, on Mount Zion in the Old City, is near a site where many Christians believe Jesus held the Last Supper as well as a tomb revered as the last resting place of the biblical King David and which draws many Jewish worshippers.

“We will not let anyone undermine religious coexistence in Israel,” Internal Security Minister Gilad Erdan said in a statement, adding that police would put a high priority on “nabbing those who carried out this despicable act”.

Israel has been struggling with a spate of hate crimes by suspected Jewish ultra-nationalists targeting Christian sites as well as Palestinians and Israeli human rights activists. [Continue reading…]

The Times of Israel: “Despite promises by the government, these incidents continue to happen,” Wadia Abu Nasser, the executive director of the Assembly of Catholic Bishops in the Holy Land, railed Sunday morning. “If we were to actually count all of these incidents, they’d be in the hundreds.

“We have limited resources at our disposal. It’s the state’s responsibility to not only apprehend these perpetrators, but to make the necessary changes in the education system to educate against this sort of thing,” he told Army Radio. [Continue reading…]

Ynet adds: “The inscriptions are not only against Jesus the Messiah, but also call to slaughter the Christians and send them to hell! How long will these acts of vandalism continue?” the church said.

“This is the area of our convent, which until today is not monitored by police cameras, although this has been promised to us in the summer of 2013 by the Israeli security authorities after the cars of the monastery were badly damaged and several hate graffiti were discovered.”

The Domition Abbey further complained of “aggressive gathering with loud music and chanting by Jewish right-wing radicals in our immediate neighborhood in the area of the Tomb of David” almost every weekend for the past three years. [Continue reading…]

In 2011, I posted a collection of articles under the headline, “Being spat at remains part of life for Christians in Jerusalem.” This included reports from Haaretz, the Jerusalem Post, and The Forward. Attacks on Christians were described by Eric J Greenberg in 2004 as what has been “Jerusalem’s dirty little secret for decades.”

Last month I received a message from a reader claiming that these incidents are being used “as a stick to beat all Jews,” to which I responded:

In none of the reports cited — all reports made by Jewish journalists — is the behavior of “young Jewish bigots” in Jerusalem portrayed as representative of Jews as a whole. At the same time, this phenomenon doesn’t sound like something that deserves being ignored — especially if the Jerusalem Post reports that the attacks on Christians are not rare but are in fact “habitual.”

“We will show zero tolerance to whomever harms the democratic foundations of Israel and its freedom of religion and we will apprehend those who carried out this heinous act.”

How can anyone take seriously this claim that the Israeli government has “zero tolerance” for these types of attacks on religious freedom when it has been clearly documented that they have been going on for decades?

This isn’t just a domestic political issue for Israel, or reason for Israeli leaders and business owners to be concerned about the impact on tourism.

If a blind eye has been turned towards these hate crimes, it most likely also includes that of American Christian Zionists who are more closely aligned with right-wing Israelis than they are with fellow Christians in the Holy Land.

I guess for CUFI and Netanyahu, the latest anti-Christian incident in Jerusalem will be a cause for little more than mild and fleeting embarrassment.