Update from Salon: Jewish Voice for Peace — New York and Jews Say No! informed Salon that they had organized the protest. The former is the local chapter of Jewish Voice for Peace, or JVP, an American human rights and social justice organization that challenges the Israeli government’s continued violence against and oppression of the indigenous Palestinian people. Jews Say No! is a New York City-based peace group that, like JVP, protests Israel’s illegal 48-year occupation of the Palestinian territories and periodic heavy bombing of Gaza. 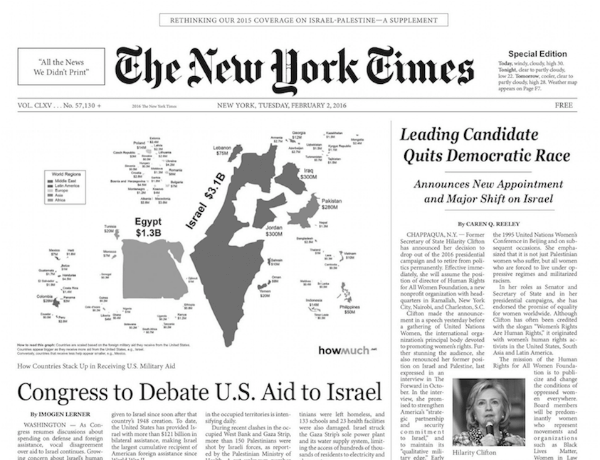 Haaretz reports: An unidentified group claiming that the New York Times is guilty of bias against the Palestinians and in favor of Israel distributed a fake version of the daily newspaper with parodied content more to the group’s liking in Manhattan on Tuesday.

The mock newspaper, which is also available online and has its own Twitter account, is represented as an effort at reconsidering the Times’ coverage of Israel and the Palestinians over the past year. Presented in a design strikingly similar to the Times itself, the online version of the “supplement” is labeled “Rethinking Our 2015 Coverage on Israel-Palestine.” [Continue reading…]

To call this a “fake” edition is to imply it was intended to deceive readers into thinking it was the real thing. I doubt that was the intention of the producers; neither is it likely that many recipients of a free copy of the print edition failed to notice that stories such as Hillary Clinton’s departure from the presidential race were fictitious — especially since they actually referred to her as “Hilarity Clifton.”

If this is a piece of activism, why the anonymity? And why spend this amount of money on a stunt that will garner public attention for less than 48 hours?

Since The Yes Men did something very similar in 2008, some observers suggest they might be behind the current undertaking. Just as likely, they merely provided a model for imitation.

If triggering editorial reform in the newspaper was actually the goal, I would have thought a steady stream of genuine letters to the paper’s public editor, Margaret Sullivan, might actually be more productive — even if they never yielded a news event.

Moreover, to characterize this stunt as “pro-Palestinian” sounds dubious. Among the range of issues confronting Palestinians, biased reporting in the New York Times probably doesn’t rank among their most pressing concerns.