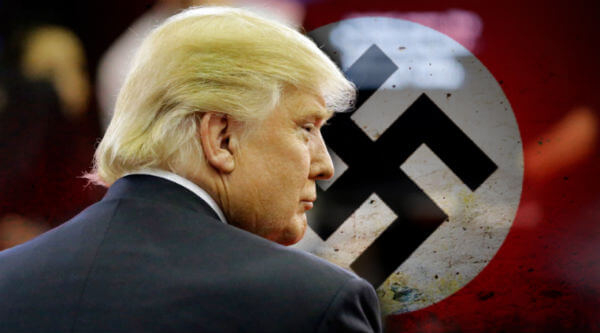 It’s commonplace to see Nazi swastika’s used to vilify public figures, but the image above was created by neo-Nazis themselves, adding the caption “May a 1,000-year Trumpenreich be inaugurated!”

Dana Milbank writes: In the final hours, the mask came off.

Donald Trump and his surrogates have been playing footsie with American neo-Nazis for months: tweeting their memes, retweeting their messages, appearing on their radio shows. After an Oct. 13 speech in which Trump warned that Hillary Clinton “meets in secret with international banks to plot the destruction of U.S. sovereignty” and that “a global power structure” is conspiring against ordinary Americans, the Anti-Defamation League urged Trump to “avoid rhetoric and tropes that historically have been used against Jews.”

Well, Trump just gave his reply. On Friday, he released a closing ad for his campaign repeating offending lines from that speech, this time illustrated with images of prominent Jews: financier George Soros (accompanying the words “those who control the levers of power”), Fed Chair Janet Yellen (with the words “global special interests”) and Goldman Sachs CEO Lloyd Blankfein (following the “global power structure” quote). The ad shows Hillary Clinton and says she partners “with these people who don’t have your good in mind.”

Anti-Semitism is no longer an undertone of Trump’s campaign. It’s the melody.

For more than a year, I have condemned Trump in the harshest terms I could conjure as he went after Latinos, Muslims, immigrants, African Americans, women and the disabled. This is both because it was wrong in its own right and because, from my culture’s history, I know that when a demagogue begins to identify scapegoats, the Jews are never far behind. [Continue reading…]

MediaMatters reports: The Daily Stormer is a virulently anti-Semitic website that worships Adolf Hitler and Donald Trump. Site founder Andrew Anglin wrote in a November 7 piece headlined “Glorious Leader’s Closing Argument Blasts the Jew” that the ad is “absolutely fantastic” because Trump portrays Jews as “what they are: a virus eating away at the flesh of this once-great nation.” He continued that the “kikes at the Anti-Defamation League once again violated their 501(c)(3) tax-exempt status and attacked Trump over the ad.”

In a November 7 Daily Stormer piece headlined “Radical Jew Attacks New Nazi Trump Ad,” “Zeiger” attacked Josh Marshall for criticizing the ad and said it has imagery that “could be right at home on a William Pierce video.” Pierce was “America’s most important neo-Nazi for some three decades until his death in 2002” and the “leader of the National Alliance, a group whose members included terrorists, bank robbers and would-be bombers,” as the Southern Poverty Law Center (SPLC) noted.

Zeiger added that the video “felt pretty great. I don’t know who he has making these ads, but they obviously know what they’re doing. And Trump obviously approved them, so he’s in the loop as well.” An image accompanying the post portrayed Trump next to a swastika: [Continue reading…]