Zack Beauchamp writes: To understand what France’s election means, and what it tells us about the rise of far-right movements around Europe, you need to understand two fundamental truths about the results.

The first is that it’s a historic victory for the far-right Marine Le Pen and her Front National party. Le Pen was one of two candidates who qualified for the second round, soundly beating the standard-bearers both of France’s traditional establishment parties — the center-right Republicans and center-left Socialists. The once-reviled Front has clearly entered the mainstream of French politics.

Le Pen came in second in Sunday’s election, with 21.7 percent of the vote. The plurality winner, upstart centrist Emmanuel Macron, won with 23.9 percent. He’s her polar opposite in virtually every respect. She wants to restrict immigration to France and pull France out of the EU; he supports keeping the borders open and proudly waved the EU flag at his final campaign rally. And when these two face each other one-on-one in a runoff in two weeks, he’s very likely to win — every poll that’s been taken so far has him up by massive margins: 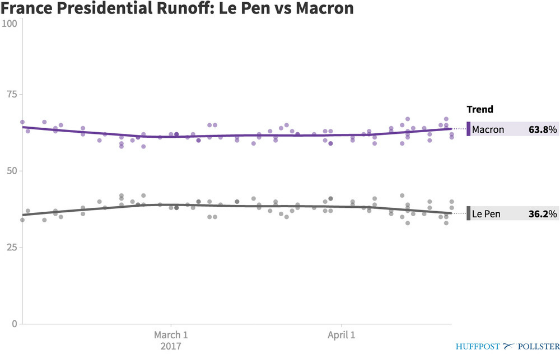 The tolerant center, in France, appears likely to hold.

What we’re seeing in France mirrors what’s happening in much of Europe. After the twin shocks of Brexit and Trump, the far-right has seen a series of setbacks. From elections in Austria and the Netherlands to polls in all-important Germany, the far-right is performing far less well than many have expected.

What these numbers suggest is that the far-right has a political ceiling: That while its supporters may be hard-core, the majority of Europeans still recoil from its vision — at least for now. [Continue reading…]