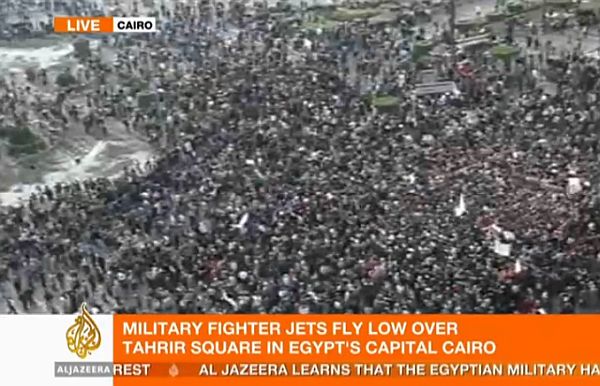 When a brutal regime is struggling to survive it turns to desperate measures.

Even as low-flying Egyptian air force Lockheed F-16s are currently attempting to shake fear into the hundreds of thousands of people gathered now in the center of Cairo, the people are showing their increasing defiance. And even now the Obama administration remains afraid of taking a strong stand in support of the Egyptian people.

We cannot honor the revolution in Egypt as impartial observers, uncertain about its outcome or its virtue. To believe in the revolution is to hold the unshakable conviction that human beings have the capacity to govern themselves and the right to live in freedom.

Egypt exposes the divide between those who fearlessly feel the thrill of freedom and those for whom freedom has become an object of fear.

As freedom spreads across the Middle East the greatest test will be faced in Israel.

Let’s be absolutely clear that the timidity with which the United States government has at this time responded to the prospect of Egyptians’ freedom, is a measure of the extent to which the freedom of 80 million people appears to pose a possible threat to the security of seven million Israelis.

Many Israelis and Americans have come to accept an unspoken and inhuman proposition: that one person’s safety can be secured at the expense of another person’s liberty. This forced exchange is an assault on human freedom.

At the same time, many others, swept up in the spirit of this moment, will be tempted to declare, “We are all Egyptians now,” but we are not.

The giddiness of freedom is the reward for those who have risen above their fears.

For those who remain the hostage of their own fears, freedom itself is another source of danger.

Under the rule of the West’s national security states we have been indoctrinated to believe that the remedy for fear is safety.

It is not. Indeed, those who cling to the fiction of high security, merely compound their own fears.

If we are to rediscover the nobility and dignity of our common humanity it will only be by defying fear with courage.

10 thoughts on “The thrill and fear of freedom”