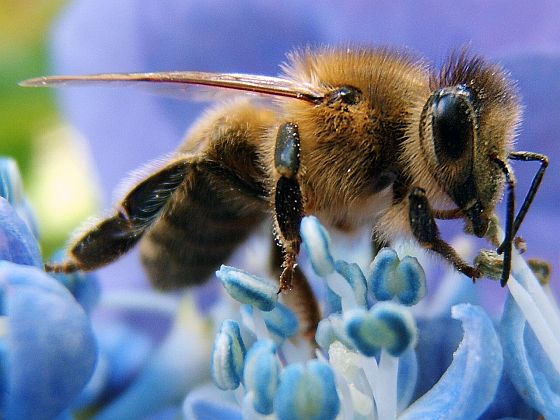 Queensland Brain Institute: QBI scientists at The University of Queensland have found that honeybees use the pattern of polarised light in the sky invisible to humans to direct one another to a honey source.

The study, conducted in Professor Mandyam Srinivasan’s laboratory at the Queensland Brain Institute, a member of the Australian Research Council Centre of Excellence in Vision Science (ACEVS), demonstrated that bees navigate to and from honey sources by reading the pattern of polarised light in the sky.

“The bees tell each other where the nectar is by converting their polarised ‘light map’ into dance movements,” Professor Srinivasan said.

“The more we find out how honeybees make their way around the landscape, the more awed we feel at the elegant way they solve very complicated problems of navigation that would floor most people – and then communicate them to other bees,” he said.

The discovery shines new light on the astonishing navigational and communication skills of an insect with a brain the size of a pinhead.

The researchers allowed bees to fly down a tunnel to a sugar source, shining only polarised light from above, either aligned with the tunnel or at right angles to the tunnel.

They then filmed what the bees ‘told’ their peers, by waggling their bodies when they got back to the hive.

“It is well known that bees steer by the sun, adjusting their compass as it moves across the sky, and then convert that information into instructions for other bees by waggling their body to signal the direction of the honey,” Professor Srinivasan said.

“Other laboratories have shown from studying their eyes that bees can see a pattern of polarised light in the sky even when the sun isn’t shining: the big question was could they translate the navigational information it provides into their waggle dance.”

The researchers conclude that even when the sun is not shining, bees can tell one another where to find food by reading and dancing to their polarised sky map.

In addition to revealing how bees perform their remarkable tasks, Professor Srinivasan says it also adds to our understanding of some of the most basic machinery of the brain itself.

When the polarised light was aligned with the tunnel, one pair of ‘place cells’ – neurons important for spatial navigation – became activated, whereas when the light was oriented across the tunnel a different pair of place cells was activated.

The researchers suggest that depending on which set of cells is activated, the bee can work out if the food source lies in a direction toward or opposite the direction of the sun, or in a direction ninety degrees to the left or right of it.

The study, “Honeybee navigation: critically examining the role of polarization compass”, is published in the 6 January 2014 issue of the Philosophical Transactions of the Royal Society B.